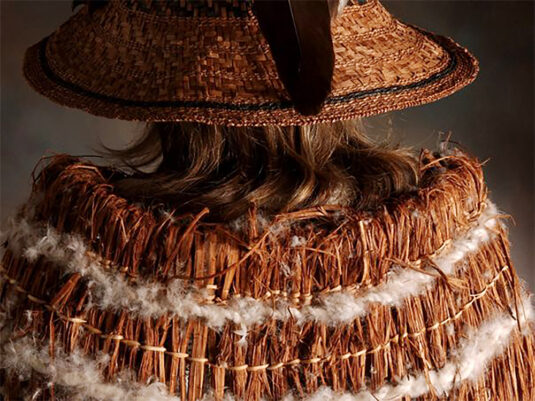 Bill Reid Gallery of Northwest Coast Art, Vancouver BC – Sep 13-Dec 10, 2017
By Michael Turner
Intangible is the latest in a series of large-scale Metro Vancouver exhibitions to showcase the art and culture of the Coast Salish people. But where c̓əsnaʔəm, the city before the city (2015) at the UBC Museum of Anthropology and Susan Point: Spindle Whorl (2017) at the Vancouver Art Gallery focused on a Musqueam city and artist, respectively, Klahoose/German guest curator Sharon Fortney has assembled works by artists from all corners of the Coast Salish territory – on both sides of the border.
Included in the exhibition are Squamish jeweller Aaron Nelson-
Moody, Cowichan printmaker lessLIE, Quinault/Isleta Pueblo sculptor Marvin Oliver, Stó:lō multimedia performer Ostwelve (Ronnie Dean Harris), and two artists for whom weaving is central to their practice – Semiahmoo’s Roxanne Charles and Squamish’s Tracy Williams.
“Intangible alludes to the hidden or unseen elements of Coast Salish culture that guide each of these artists in their work,” writes Fortney. “We want visitors to realize that they are only seeing one element of culture – important aspects like language, traditional knowledge, the importance of place, are not always represented by visual culture.”
With regards to how one exhibits that which is “hidden or unseen,” Fortney, whose doctoral research focused on “the status of community and museum relations in Canada and the US,” is less interested in traditional museological devices like wall didactics than in videotaped artist interviews and interventionist performances. Michael Turner
billreidgallery.ca