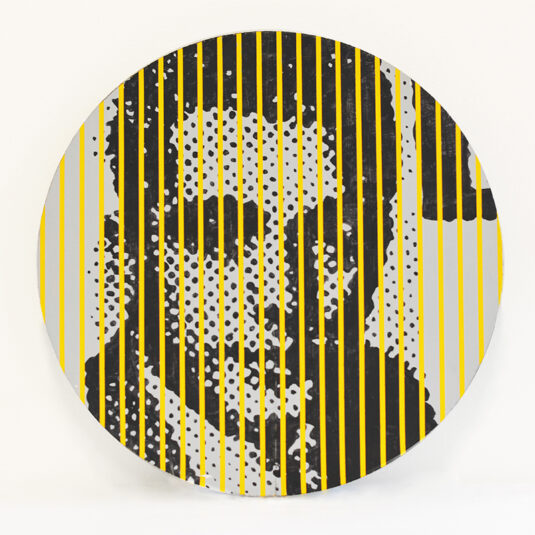 Salmon Arm Arts Centre, Salmon Arm BC – Sep 1-30, 2017
By Michael Turner
Chris Cran’s interest in the laziness of everyday language makes writers think twice when writing about his work. Indeed, to write that Cran is fresh off an acclaimed National Gallery of Canada survey exhibition of his work is to risk having the words FRESH OFF tramp-stamped onto a painting of a bare lower back and donated to a fundraiser under the writer’s name. Not that Cran would do this – he is funnier than that. Funnier and more generous.
In recognition of his roots in BC’s Shuswap region, Cran and his collectors have made available to the Salmon Arm Arts Centre a series of paintings that highlight his renowned wit, but also the many styles in which he works, from photo-realistic self-portraits to those that combine elements of Pop Art, Op Art, Minimalism and abstraction. What is not readily on display but is implied in Cran’s paintings is the importance he places on the viewer’s role in completing what hangs before them.
“It’s an absolute honour to host this exhibition,” says director/curator Tracey Kutschker. “I wanted to give our community a chance to spend some time with Chris’ work. His pieces play on illusion and perception, so they will challenge our visitors, and perhaps leave them wondering what story lies beyond the image.
salmonarmartscentre.ca