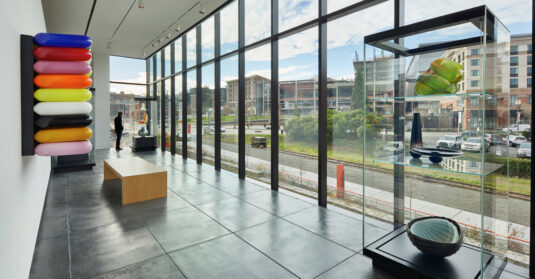 TACOMA ART MUSEUM, Tacoma WA - Inaugural exhibition
by Rosemary Ponnekanti
Glass trees. Glass water. The new Benaroya Wing at Tacoma Art Museum, which opened January 19, not only tells the story of studio glass art in the Pacific Northwest, it subtly reimagines the medium, offering a serene space that floats both inside and out. Hovering over Hood Street like a heron, the new wing isn’t big – just 7,000 square feet, less than halfthe size of the Haub Wing at the other end of the building. Yet with floating divider walls, cleverly hidden spaces and daylight flowing from a long exterior glass wall, this wing feels light and airy.
Then there’s the glass itself: a gleaming lime Libenský/Brychtová triangle with an eerie “eye,” exquisite miniatures from Cappy Thompson, the subtle red Chihuly that kick-started Jack and Becky Benaroya’s collection. This first exhibition, Metaphor into Form: Art in the Era of the Pilchuck Glass School, pairs unexpected items from both the Benaroya gift – a huge windfall for Tacoma – and the TAM collection. Jen Elek’s burst of glass cylinders shouts to a cabinet of filigree Dante Marioni goblets; a jagged Oliver Doriss vessel contrasts with a cascading glass waterfall by Nancy Mee.
Also on show is The Documenta Project, a series of delightfully tender photographs of Northwest glass artists by Mary Van Cline, and Arboria, a roomful of four “trees” newly commissioned from Debora Moore, each bursting into lush blooms or fruit. In the lobby is the 30-foot work Current by Martin Blank; on the exterior wall, three bronzed Wings by Ginny Ruffner seem to waft upwards.
tacomaartmuseum.org