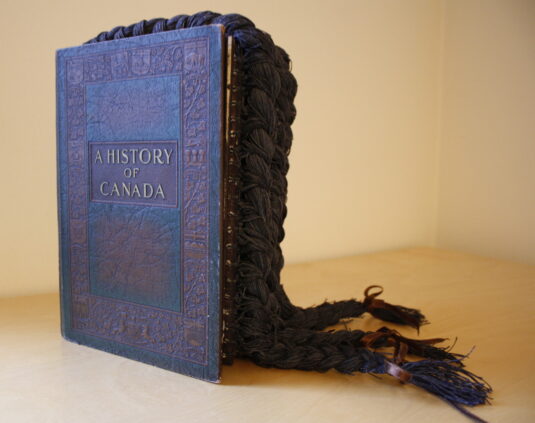 OPEN SPACE, Victoria BC - To Feb 26
by Christine Clark
Chantal Gibson is a writer, visual artist and educator who teaches visual and written communication courses in Simon Fraser University’s multidisciplinary School of Interactive Arts & Technology, where she received a 2016 SFU Excellence inTeaching Award. Most recently, Gibson exhibited her pieceSouvenir as part of a groupshow titled Here We Are Here: Black Canadian Contemporary Art, at both the Royal OntarioMuseum and the Montreal Museum of Fine Arts. Souvenir is a collection of 2000-plus souvenir spoons, all of which have been rendered indistinguishable under a coating of black paint.
How She Read: Confronting the Romance of Empire is a collection of altered Canadian history books and textbooks, a series in process since 2011. These sculptures seek to rewrite the truth of recorded history and the learned narrative of Canada’s history as a country. Gibson writes of the series: “Black thread is used as a rhetorical device, as a metaphor for written text and a marker of Otherness – of new voices. The braided, twisted, knotted material challenges what has and has not been said – erasing, redacting, editing the written content.”
During a residence period at Open Space, Gibson will launch her first book of poetry,How She Read. Described by publisher Caitlin Press as “genre-bending,” these poems promise a critical exploration of the experiences of Black women amid the misogyny, stereotypes and racism of Canadian history and culture. Gibson will present readings at both Open Spaceand at the University of Victoria’s McPherson Library, where she will exhibit a satellite installation called TOME (to February 26), a reimagined book of memory and landscape made from cotton and coffee.
Artist-in-residence at Open Space Feb 14 - 21
Artist talk and panel discussion Feb 16, 2pm
Book launch and reading Feb 19, 7:30pm
Reading at McPherson Library, University of Victoria, Room A003, Feb 14, 3pm
openspace.ca