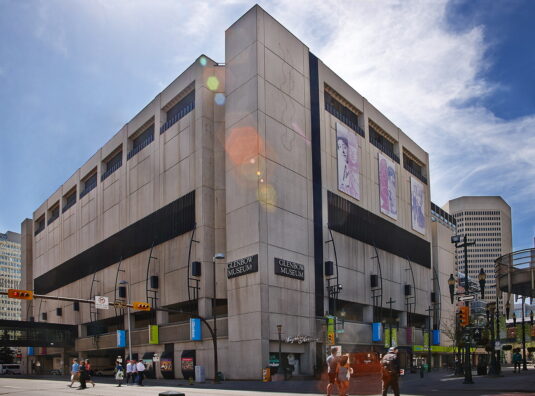 GLENBOW MUSEUM, Calgary AB - Feb 3 - July 14
By Michael Turner
Antoni Tàpies was born in Barcelona in 1923 and raised in a household of Catalan nationalists. Although partial to the republican cause, he was equally attracted to the paintings of Braque, Duchamp, Kandinsky and Picasso, whose reproductions he was exposed to in the groundbreaking Christmas 1934 issue of D’Aci i d’Allà. Like hisfather, Tàpies entered law school, but he abandoned his studies in 1943 to pursue art full time – a decision that led him through a series of technical experiments in paint mixing, in addition to readings of Sartre and Eastern philosophy.
Although active in painting, assemblage and sculpture, Tàpies, like the American Andy Warhol (1928-1987), was best known for his printmaking. However, whereas Warhol focused on more commercially acceptable applications of narrative and figurative content, Tàpies preferred his surfaces coarse and layered, like his expressive abstract paintings. To achieve these effects, he employed a range of unconventional if not eccentric techniques, from collagraphic embossing and flocking to folding, cutting and tearing.
In 2010 the Glenbow acquired a substantial selection of Tàpies’ works for its permanent collection. These works range from the late 1940s to the mid-1970s, and provide evidence of an artist known as much for his expressive prints as for his technical innovations. A recurrent motif is Tàpies’ use of red and yellow – the colours of the Catalan flag. In his Mestres Catalunya (1974), the viewer does not so much register the differentiation of these colours as feel the work in its material totality, as if waved victoriously from the top of a hill.
glenbow.org