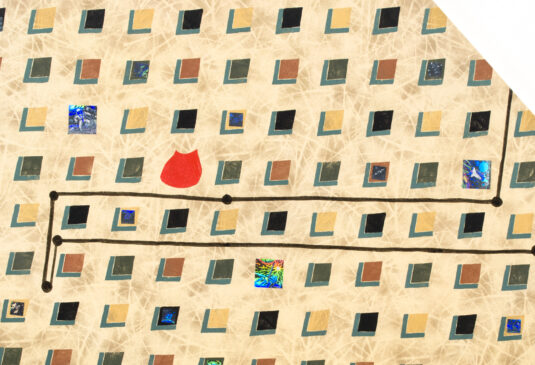 CATRIONA JEFFRIES GALLERY, 950 East Cordova St, Vancouver BC
By Michael Turner
Catriona Jeffries turned heads in 2005 when she relocated her gallery from Granville Street’s“Gallery Row” to a more spacious former automotive warehouse on the city’s grittier east side. But success followed. Now she is at it again, moving to an even larger space near the Downtown Eastside’s industrial waterfront.
With over 30 years of exhibitions, international art fairs and gallery publications under her belt, Jeffries, who represents artists such as Brian Jungen, Janice Kerbel and Geoffrey Farmer, is among the leading contemporary art dealers in the country. Preview caught up with her as she prepared for the February 9 grand opening of the new gallery, designed by Patkau Architects.
Preview: Can you tell us about your opening exhibition?
Jeffries: It’s called Unexplained Parade (follow the river), from a 1994 to 1997 Jerry Pethick wall work. I asked the gallery artists to provide a name of another artist whose work is significant to their own practice. For the first three months we will rotate works by gallery artists and those they chose.
Preview: You’re obviously excited about the new space, but you seem equally excited about your new neighbourhood.
Jeffries: I moved to an industrial neighbourhood in 2005 because I wanted to feel closer to the working practices of my artists, their need of a gallery as both an on-site production space and an exhibition space. Same with the recent move to the old Pilkington metalwork shop, a company that began with the grandfather, Clark, who worked as a blacksmith near the Bayshore Hotel. Clark remembers when the land under us was marshland.
Preview: What are some of the things you can do with this new space that you couldn’t do in the former space(s)?
Jeffries: The new exhibition space is larger. The storage space – much larger. The big difference is the exterior space, where we removed the asphalt and planted three honey locusts.I am hoping this space, too, can serve as an exhibition space.
catrionajeffries.com