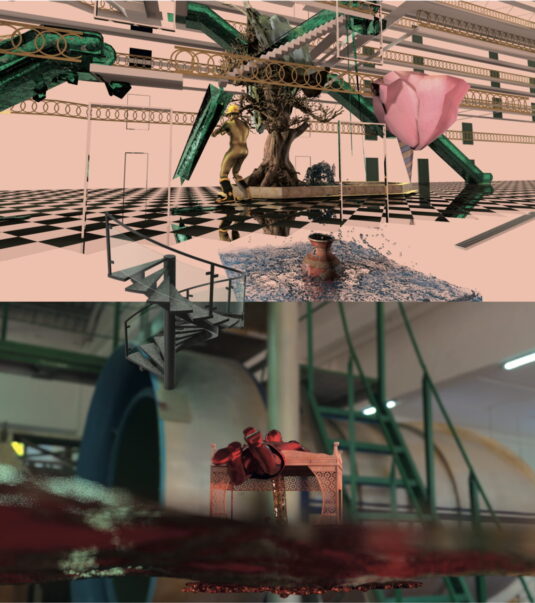 Centre A, Vancouver, BC -

CENTRE A: VANCOUVER INTERNATIONAL CENTRE FOR CONTEMPORARY ASIAN ART, Vancouver BC - Feb 23 - Jun 1
By Michael Turner
In celebration of its 20-year anniversary and its recently renovated space at the Sun Wah Centre inVancouver’s Chinatown, Centre Ahas selected Hong Kong artistSamson Young’s It’s a Heaven Over There as its inaugural exhibition. Young’s multi-media installation (his first solo show in Canada) began as a research project focused on the life and times of Won Alexander Cumyow, the first person of Chinese descent born in Canada. For Young, recognition of Won as both a historical subject and the inspiration for an artwork installed in a former 1980s-era retail shopping mall constitutes a “double vision of retrotopanism.”
As with many post-war North American shopping malls, features are installed to “remind” consumers of a safer, more settled past: most notably, a vision of the harmonious town square, as manifest in the ubiquitous fountain court, what Young refers to as “an entryway into the poetics of the diasporic imagination.” Won’s status as a first-generation Chinese Canadian represents a literal manifestation of a safer, more settled – and indeed more hopeful – environment than that which his parents left behind for the country of his birth.
In addition to his work as a media artist, Young, who holds a PhD in composition fromPrinceton, is known for his musical and sound compositions as well as collaborations with orchestras worldwide. He has had solo exhibitions at the Kunsthalle Düsseldorf, Centre for Chinese Contemporary Art in Manchester, M+ Pavilion in Hong Kong and Hiroshima City Museum of Contemporary Art, among other venues. In 2017 he represented Hong Kong at the 57th Venice Biennale.
centrea.org