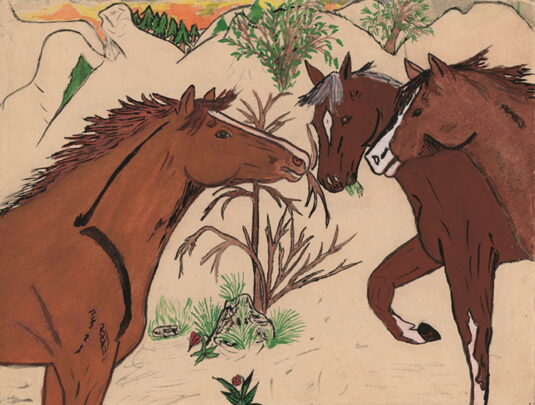 KELOWNA ART GALLERY & OKANAGAN HERITAGE MUSEUM, Kelowna BC - To Apr 14
By Michael Turner
Nk’Mip Children’s Art is the name given to a body of drawings and paintings made on paper, mat board and canvas hide in the late 1930s to early 1940s by students of theInkameep Day School, located onthe Osoyoos Indian Band reserve. But the story of these artworks begins well before that with the school’s builder, Chief George Baptiste.In the words of Anthony Walsh, who taught at the school between 1932 and 1942, Baptiste was “ahead of his time in that he wanted his children taught within their own background, not sent away.”
The Inkameep Day School emphasized thoughtful and creative expression throughout its course work, with an emphasis on the performing and visual arts. Equally important was the role the school would play as a bridge-builder, linking Indigenous and non-Indigenous communities both near and far. Before leaving the school, Walsh was active in establishing the Okanagan Society for the Revival of Indian Arts and Crafts, a chapter of the BC Indian Arts and Welfare Society, whose members lobbied provincial and federal governments for a restructuring of health and education on reserves.
Looking at the 75 drawings and paintings on display, viewers will note a range of activities common to the Okanagan region, from horses and horseback riding to more formalized rituals, including rodeos and those associated with the Christian faith. In most instances the figures appear happy, if not joyous. A railway station farewell is not a cause for sadness but a celebration. Same, too, for a visit to the graveyard, where eight ghosts – five of whom are revealed to be skeletons – dance about the tombstones, smiling.
Free guided tours on Saturdays, 1pm
kelownaartgallery.com