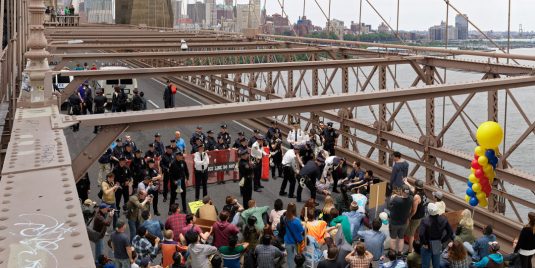 Canada’s representative at this year’s Venice Biennale (to November 27) is lens-based artist Stan Douglas, known for his careful examinations of local situations relative to the sock hop of global capitalism and its jukebox of Top-40 narratives. Douglas’ Canada Pavilion exhibition focuses on protest movements, and is now also on display at the Polygon. At the nearby Griffin is a compact retrospective featuring photographs made by Douglas from 1990 to the present.

Douglas’ 2011 ≠ 1848 consists of four large-scale photographic prints and a two-channelvideo projection. The prints depict protests and riots from 2011, beginning with the January 12 sit-ins along Tunis’s Avenue Habib Bourguiba (marking the onset of the Arab Spring). Following that, the prints depict the June 15Stanley Cup riot in Vancouver; violent skirmishes between youth and police in London on August 9;and the arrest of Occupy Wall Street participants on Brooklyn Bridge on October 1.

In a somewhat contrasting video,Douglas presents a fictionalized jam between rappers from London’s Grime scene and those of Cairo’s Mahraganat. This work, entitled ISDN, takes its name from a now-outmoded system that allowed high-quality audio to be relayed through telephone lines. Although stylistically distinct, the Grime and Mahraganat genres share a similar production methodology: both employ open source and pirated software, and sample freely from the internet.

Of the works in Allegories of the Present, Griffin director Lisa Baldiserra has this to say: “Each of the artworks in this exhibition focuses on key sites of rupture in Vancouver and BritishColumbia. They demonstrate contested histories and sites of resistance, from small-town Ruskin to Hogan’s Alley. The exhibition traces a narrative that shows how Douglas approaches the fragmented nature of personal and historical stories.”