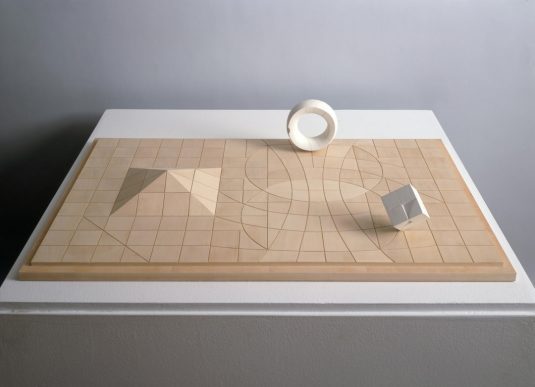 George Tsutakawa: Language of Nature / Looking Up: The Skyviewing Sculptures of Isamu Noguchi

Looking Up: The Skyviewing Sculptures of Isamu Noguchi

Two magnificent exhibitions of Japanese American sculptors with connections to the Pacific Northwest create a twin pendant of art museum blockbusters in the modern art vein. Isamu Noguchi (1904-1988) and George Tsutakawa (1910-1997) are honored with extensive surveys of their works in three dimensions as well as two, including paintings, prints, photographs and studies by each artist.

Though their styles are quite distinct and their professional destinies took quite different paths, both artists drew heavily from nature and spent considerable time in Seattle – and Bellingham, in Noguchi’s case. Noguchi’s Western Washington University–sponsored exhibition is tied to the artist’s early Skyviewing Sculpture (1969), first in a series of commissions from other artists for the university’s Outdoor Sculpture Collection, now hailed internationally for its pantheon of abstract sculptors. Similarly, his Black Sun (1969) and Landscape of Time (1975) in Seattle meant significant exposure for the artist. An exhibition catalog thoroughly documents the whole Skyviewing series. Scheduled events include lectures and a symposium October 21-22 with visiting Japanese scholars.

Thoroughly bicultural, both artists retained allegiance to and knowledge ofclassical Asian art. This permeated avant-garde sensibilities awakened by the major modern artists they met. Tsutakawalearned from Alexander Archipenko, the exiled Ukrainian Constructivist who taught three master classes at the University of Washington School of Art. The diligent student subsequently became known as the leading public art fountain sculptor in America, with over 40 works across the nation. Major sculptural works based on Himalayan rock forms are on view at BIMA along with studies, maquettes, lamps, prints and sumi-e ink paintings, also documented in a catalog. Noguchi went directly to Constantin Brâncuşi in Paris and worked as a studio assistant for two years. The influence of these giant mentors can be seen in the powerful forms on view on Bainbridge Island and in Bellingham this fall.