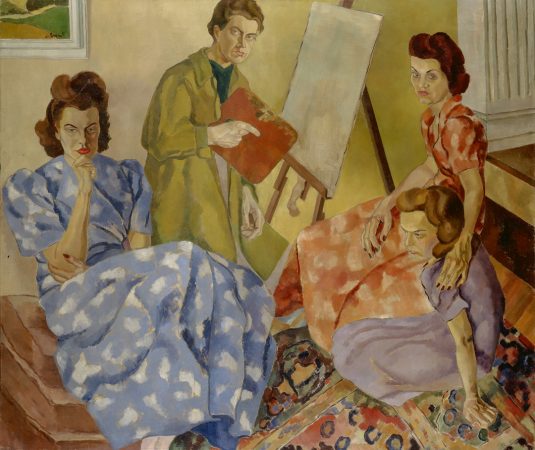 Organized and circulated by the McMichael Canadian Art Collection, Uninvited is an ambitious and comprehensive redress of a gender void that became obvious during the 2021 centenary of the founding of the all-male Group of Seven. Uninvited (and its accompanying catalogue) surveys art created by 31 women who were the Group’s female peers but who were not asked to share their nationalist spotlight during their lifetimes and are little known to many contemporary viewers. Featuring some 200 paintings, sculptures, prints and photographs along with stellar examples of basketry and beadwork, all created between 1920 and 1945, the show spotlights both settler and Indigenous women artists who previously belonged to what the show’s curator, Sarah Milroy, describes as “a lost generation.”

Speaking to Preview by phone, Milroy cites the hugely influential role the Group played “in the storyof how Canada came to understand itself as a nation.” But she also talks about how that understanding is now being “interrogated” by critics, curators and historians, and how the women in Uninvited compose another side of the story. Milroy notes that some of the Group’s female peers, such as Anne Savage, countered a masculine and colonial notion of “wilderness,” one that ignored the eons-old presence of Indigenous people and culture, by depicting living Indigenous villages filled with people and activity. Others, such as Prudence Heward, subverted long-standing tropes of Western art,such as the female bather. “She takes this idea and makes a picture that is all brute force and blunt, fleshy masses,” Milroy remarks. Still others sympathetically portrayed working-class life or, likeMarion Long, depicted gritty city streets.

As for her own role in realizing Uninvited, Milroy is grateful to all the feminist scholars, among them Kristina Huneault and Janice Anderson, whose work made her work possible. “I was sort of the orchestra conductor but it really was a symphonic effort,” she says.