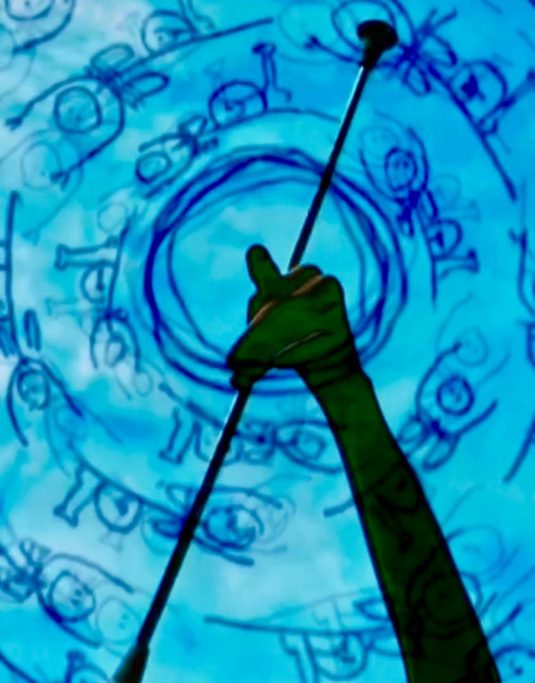 Born in Churchill, Manitoba, of Sayisi Dene descent, Zachery Cameron Longboy is a pioneer figure in the emergence and development of contemporary Indigenous performance-based video installation. Central to his multimedia installations, which often combine elements of spoken text, found sound and sculpture, is an equally multivalent self-identification as a “White-adopted/Native gay/Two-Spirit/Sixties Scoop survivor.” Longboy’s works are held in collections that include the National Gallery of Canada and have been screened at New York’s MoMA, in addition to numerous showings at Queer and First Nations venues.

Inspired by a dream, Guardian of Sleep features an array of images that include animations of petroglyph-like markings, running herds of caribou and filmed footage of the baton-twirling artist leading a parade from a forest. The video was produced on an iPhone, a compositional method consistent with Longboy’s long-standing interest in emergent technologies and their potential, not only as a tool or a medium, but also as metaphorical constructs that, in this instance, mirror the forms dreams take as inherently collagist.

For those interested in hearing Longboy speak on his work and practice, he will be appearing at Surrey Art Gallery Association’s Thursday Artist Talk series on November 3. Also at the gallery (opening September 17) are videopoetry works in Poets with a Video Camera, a video by Henry Tsang, vinyl murals by Atheana Picha and Sandeep Johal, mixed-media work by the Surrey Art Teachers Association, and two multi-media exhibitions that “speak to the plurality of visualizing Blackness” – Concealed Cultures and i see; i breathe; i am!