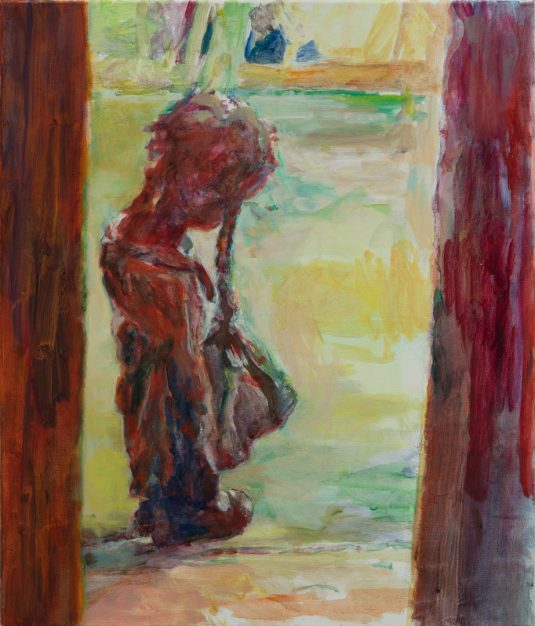 Amitai Ben David: There Once was a Girl Named Hester, and Other Damaged Kids

The Hester in this series of paintings by Amitai Ben David is a doll lost in a world where, according to Touchstones Nelson, “beauty and horror are entangled, where nature blossoms and burns away in fantastic shapes and colours.” This world being World War II Europe, and the doll a stand-in for the artist’s Jewish Dutch mother, Hester Trompetter,who was orphaned during the war, brings tomind Charlotte Salomon’s autobiographical Life? or Theatre? (1981) and Art Spiegelman’s Maus (1980-91), but with some important stylistic and material distinctions.

While Life? or Theatre? tells the story of the Berlin artist’s life (until her capture by Gestapo agents) in a series of spare, impressionistic gouaches, and Maus’s pen-and-ink story-within-a-story of Nazi concentration camps is presented in the clean and crisp graphic novel style, Ben David relates Hester’s tale through an expressive play of oils, “where brushstrokes build images and deconstruct them simultaneously.”

This dialectical approach to picture-making is well suited to the complexities common to all three projects – projects that, though rooted in the persecution and murder of Jews during World War II, contain everyday conflicts found in all families, including those who are orphaned from them. In writing about these paintings, Touchstones curator Arin Fay aptly notes, “There is a dissonance to these works, both abstract and familiar, sing-song sweet and sinister, and the story they tell is a compounded and diasporic fairy tale of sorts, about people bothreal and imagined.” If Hester should ever find herself in book form, she will be in good company.