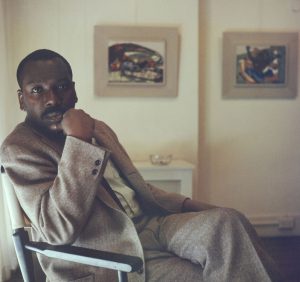 After more than 60 years, Jacob Lawrence’s series Struggle: From the History of the American People has been brought together out of private collections for a single West Coast exhibition at the Seattle Art Museum.

Lawrence, “one of the most prominent and celebrated Black artists of the 20th century,” was born in Atlantic City in 1917. He spent several years in Philadelphia foster care before relocating with his mother and siblings to Harlem at the age of 13. With the onset of the Great Depression, he dropped out of high school to help his family. For a while, he attended art school in Harlem. Lawrence taught at the Pratt Institute and Brandeis University, among others, before his fi nal appointment at the University of Washington School of Art, between 1970 and 1985; he died in Seattle in 2000.

Lawrence’s Struggle storyboards a national history of burdens and strivings with the politics of race. Across its 30 tempera panels created during the Civil Rights era (1954-56), Struggle is a narrative time capsule – a collage in brushstrokes on race and sex, on leaders and war.

Some panels too fragile to be included in the exhibition, or panels in locations unknown, are represented by color reproductions – and in one case, by a black-and-white photo. In another, the missing panel is represented only by a framed empty space. In this hyper-contemporary metaphor, Struggle feels disquietingly present tense, yet refl ects a nation in which dynamic identity and personhood for all is still outside of the frame of our American story. 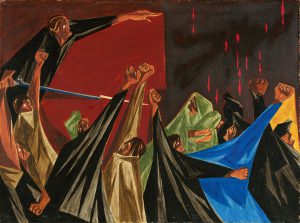 Jacob Lawrence, …is life so dear or peace so sweet as to be
purchased at the price of chains and slavery?—Patrick Henry, 1775,
1955, egg tempera on hardboard.
Collection of Harvey and Harvey-Ann Ross

The narrative expression of this series feels ambitious, but also urgent and bold in the way it rescues those on the margins and pulls us to the center, to be seen and heard. As with the entirety of Lawrence’s work, Struggle values, captures and amplifies a more representative national voice.

The exhibition features the 31st panel as imagined in works by youth, curated by SAM’s Teen Arts Group. Also featured are artists Derrick Adams, Bethany Collins and Hank Willis Thomas, whose works also document the cross-cultural dependence of our national past and present.