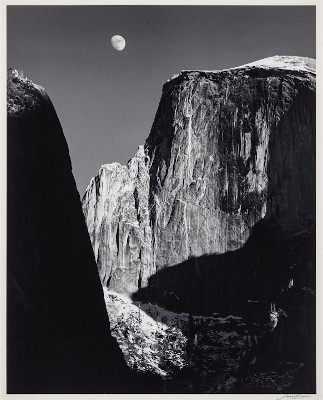 Organized by the Museum of Fine Arts, Boston, this carefully curated touring exhibition offers a deepened perspective on the iconic photographs of Ansel Adams (1902-1984), one of the foremost photographers of the 20th century.

Adams is best known for his epic views of Yosemite National Park, a subject he focused on from the beginning of his career. The artist first visited the park at the age of 14, and his experiences there profoundly influenced his significant contributions to environmentalism and work with the Sierra Club.

The exhibition includes over 100 photographs, from early prints with a soft-focus pictorialist viewpoint to later works with the sharp, crystalline approach of Adams’ mature style. Encompassing the troubling aspects of the landscape and life in the West, images from the 1930s document California ghost towns, drought, and scars of the Depression era on his native San Francisco. Adams also recorded views of World War II internment camps in the early 1940s.

Juxtaposed with Adams’ works are photographs by his 19th-century predecessors and contemporary artists, setting up a dialogue among those who influenced Adams and those whom he influenced. This stunning multi-century collection of photographs reveals insights into the vast and changing landscape of the American West – a primary theme in Adams’ oeuvre.
Curated by Karen Haas of the MFA, Boston, this show also creates a relevant dialogue about photography’s critical role in exposing the current realties of preservation, land ownership and belonging to a place. In a 2008 piece, Midsummer (Lupine and Fireweed), Laura McPhee captures the beauty of destruction and regrowth in a post–forest fi re Idaho landscape, while Mitch Epstein’s 2007 depiction of a golf course set next to a California wind farm offers a sardonic viewpoint on land use in the West.