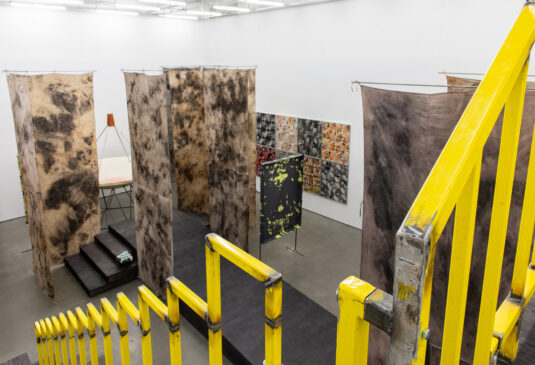 Contemporary Art Gallery, Vancouver, BC - To May 2

Corbin Union is an artist collective comprised of core members Miruna Dragan (Calgary), Jason de Haan (Calgary) and Warren McLachlan (Vancouver) who have, since 2012, met annually at the deserted company town of Corbin, in the East Kootenay region of southeastern BC. These meetings result in objects and installations (produced individually and collectively), and the motivation appears closer to divination than representation: how the consequences of one culture (extractive capitalism) imposed on another (the Ktunaxa Nation) extend beyond our busted towns to haunt our booming centres too.

Founded in 1908 by American financier Daniel Chase Corbin after the discovery of a bitumen-rich coal seam, the town of Corbin grew to 500 by 1920, populated largely by Italian, Welsh, Czech and Slovak families. Pay was low and conditions were harsh. Workers struck in 1935, and after months of protest, a company tractor barrelled through a line of picketing women, crushing their legs. In 1936, the Corbin Coal & Coke Co. ceased operations and, while coal mining continued in the area until 2018, the town of Corbin was absorbed by forest.

Described by co-curator Kimberly Phillips as “an expansive installation informed by the vernacular architecture of Corbin’s original townsite,” OSOSO features a range of objects: some found, some fashioned, all of them contributing to the exhibition’s overall choral effect. In McLachlan’s Structure for Observing Atypical Flight (Tailings Pond) (2021), a satellite dish is turned open-side up to suggest a rain-hungry bird bath. Further on the bird-as-signal theme, Dragan’s single-channel video Hummingbird Guided Meditation (Gabriel’s Garden) (2019-21) emphasizes pattern as presence. A similar emphasis on signal and pattern can be found in de Haan’s collagist Swamp Watch (2020).