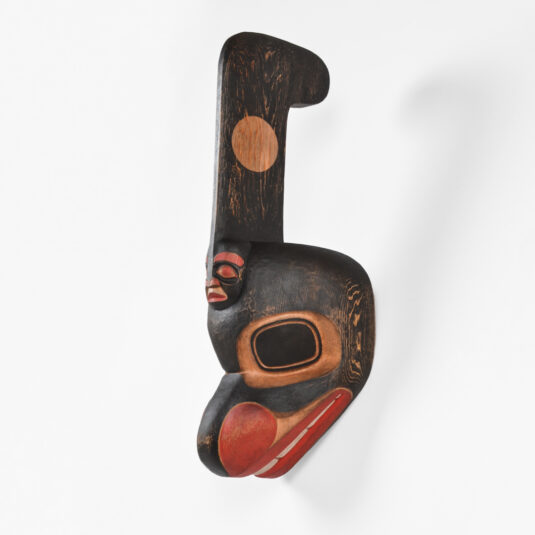 Ta’kiid Aayaa, Corey Bulpitt is a gifted Haida carver and a member of the Naikun Raven clan. After graduating from Langley Fine Arts School in 1996, he apprenticed under his uncles Christian White and Jim Hart. He has carved a number of totem poles, including those for Scouts Canada, Queen Charlotte Lodge and the Namgis burial ground in Alert Bay. His works can be found as far afield as New Zealand, where, under the direction of Maori master carver Lionel Grant, he completed a pole with White, Dempsey Bob (Tahltan/Tlingit) and Joe David (Nuu-chah-nulth).

One of the more unique works in the Lattimer Gallery is Sgungo, a red cedar mask with duck feathers, horse hair and acrylic paint. Bulpitt writes: “This mask is a study of an old Haida mask that features feathers around the mouth, and the appearance of starvation. I concluded that this mask represents the hermit of Kiusta. His cave later became a burial cave.”

Another of his red cedar masks is Naikun Skaana. In clean, simple lines, Bulpitt has carved a Killerwhale design that is both elegant and weathered-looking – the latter effect achieved through a finishing technique that has become part of his signature style. Of this mask Bulpitt says: “Naikun Qiigaaway is the clan I come from; one of our crests is the Killerwhale. This mask represents ‘The End of His Fin Turned Back.’ There is an ancestor as the blowhole of the whale.”

Corey Bulpitt’s work can also be seen in Em̓út | Being Home at the Libby Leshgold Gallery through May 1.