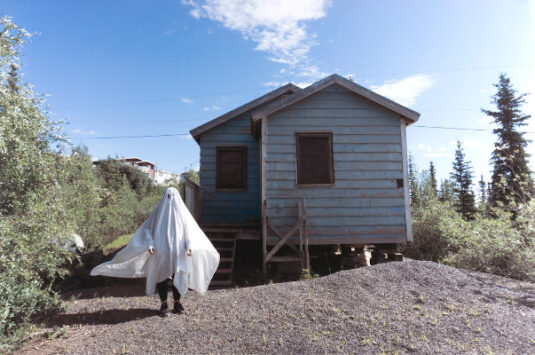 Kablusiak, SHED (akunnirun kuupak), 2019, one of a five-part digital photo/performance series, edition 1/3. Collection of the Alberta Foundation for the Arts

ALBERTA FOUNDATION FOR THE ARTS

In February 2021, the Berlin Institute of Technology released a study that claimed the risk of COVID-19 infection in indoor spaces was lowest in museums. This came as welcome news to visual arts patrons, but it left many wondering about regional variation. In Alberta, per capita rates of infection have been among the highest in Canada, resulting in prolonged closures of the Art Gallery of Alberta, Glenbow Museum and Illingworth Kerr Gallery, among others.

Alberta museums are important contributors to Preview and we miss their presence in our pages. But museums are more than buildings and the people who work in them; they are home to collections, some of which are available online. The Alberta Foundation for the Arts is not a museum, but a lender to museums. What it has in common with museums is a collection. Recently, I clicked on its “Recent Acquisitions” link and looked through the work of Kablusiak.

In Kablusiak’s five-part digital photo/performance series akunnirun kuupak (2019), a figure appears in a series of public spaces covered in a ghost sheet. Curious to know more, I discovered on the Norberg Hall gallery site that Kablusiak is Inuvialuk, an artist and curator based in Mohkínstis (Calgary), and their series was shown at Edmonton’s Art Gallery of Alberta in 2019.
According to guest curator Jessie Ray Short: “The ghost serves as a foil for understanding their identity as an urban Inuk who is part of a growing Inuit diaspora. In bringing the ghost performance to Inuvik after a long absence and presenting the culmination of this work in Edmonton, Kablusiak reconnects to an important part of their being while simultaneously creating a presence for Inuit wherever they may be.”

Kablusiak is another artist I might not have learned of had I somewhere else to go.