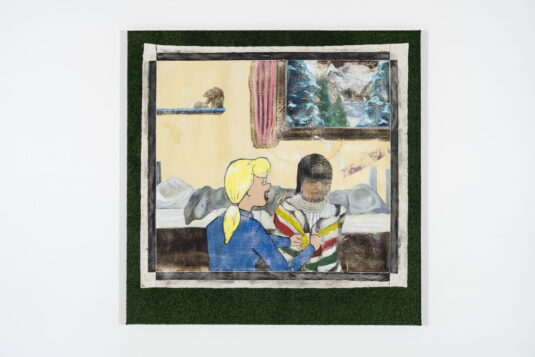 AUDAIN ART MUSEUM, Whistler BC - To May 6
by Michael Turner
In 2009, Whitehorse-based artist Joseph Tisiga, of Kaska Dena ancestry, enacted a performance named after a 1936 collection of campfire stories published by Anglo-Canadian conservationist Archibald “Grey Owl” Belaney. Entitled Inside the Empty Cabin, the performance inverted Grey Owl’s interactions with the natural landscape through Tisiga’s own masquerade: that of a suit-and-moccasin-clad corporate executive moving through empty office spaces. The resultant photographs, along with drawings, paintings, collages and sculptures, provide the basis for an exhibition focused largely on historic settler constructions of “Indianness.”
A related, if not more complicated work, is fashioned from the holdings of English-born Oliver Jackson, who operated a roadside Okanagan museum in the late 1950s. Although believed to be a collection of Indigenous artifacts, the works (mostly beads, masks and moccasins) turned out to be made by Jackson himself. After his passing, Jackson’s family tried to give the collection to the Kelowna Museum, and then the Westbank First Nation, whose elders, according to Audain director and chief curator Curtis Collins, were “interested,” based on Jackson’s assistance in helping band members “reconnect with some of these lost traditions.”
Another notable work is That Infinitesimal Unit (2009), a symbolic oil painting featuring a top-hatted settler, an Indigenous figure in furs and a looming dude in a red hoodie. All are seated around a chessboard in the middle of what at fi rst looks like an open road, but might well be the painterly equivalent of a blast from the past. In mathematics, the infi nitesimal is that which is too small to measure. In painting, it is sometimes that which cannot be described, only felt.
audainartmuseum.com