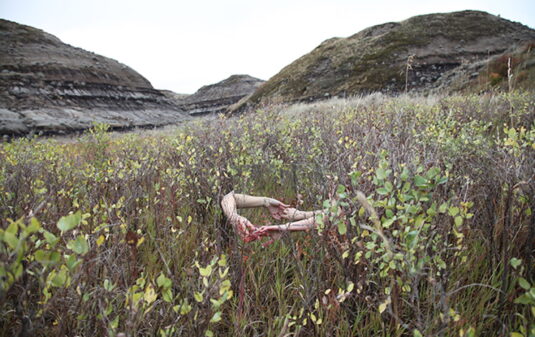 The Reach Gallery Museum, Abbotsford, BC

THE REACH GALLERY MUSEUM, Abbotsford BC - To May 5
by Michael Turner
Artist Stephanie Patsula came to public attention with Forum (2014), a window installation derived from her work with the Kamloops Museum’s permanent collection. Commissioned by Kamloops Art Gallery curator Charo Neville to create a work for the city’s 2014 Luminocity festival, Patsula selected 68 local artifacts and texts for a multimedia mash-up of sculpture and video projection. For her current exhibition, Patsula presents a body of work oriented from the opposite direction: not the relative safety of the airless, tomblike museum archive, but the wide-open stage of the great outdoors.
Another notable di erence between Forum (2014) and the large-scale photos in Patsula’s (In) Site exhibition is the literal presence of the artist in the work. In Forum, this presence is figurative: a record of gestures made by the artist through the aesthetic arrangement of objects and texts. But in the untitled (In) Site photos, the literal gesture is present in the form of the artist’s hands as they reach from behind large and variously shaped mirrors. Here, the artist is both present and absent; but in enlisting her refl ection, the gesture is no longer singular but in relation to “another.”
The use of mirrors in the landscape is not new to lens-based artists. Robert Smithson famously used them in his mirror displacements in the late 1960s, as did Dan Graham, whose glass pavilions confuse notions of inside and outside, subject and object, in relation to contemporary sculpture. What distinguishes Patsula’s sculptural montage lies in part in her willingness to explore and perform her work in remote landscapes, alone. A gesture that, in itself, is worthy of attention.
thereach.ca