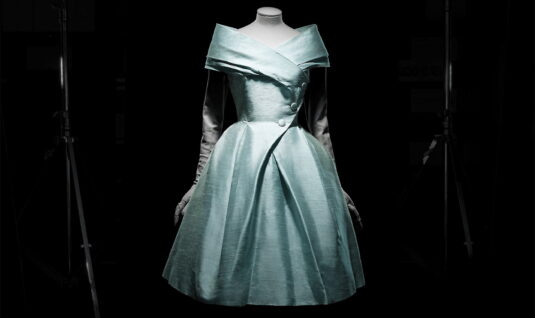 GLENBOW MUSEUM, Calgary AB - To June 2
by Michael Turner
Most people know the story of how pleats, cuffs and ruffles fell out of fashion during the Second World War, due in large part to rationing. Fewer know that the postwar “New Look” is attributed to the 1947 presentation of designer Christian Dior’s first collection. The designer is heralded for his exaggerated massing, unique silhouettes and intricate embroidery, but Dior’s legacy might lie in his ability to sidestep wartime pragmatism without appearing ostentatious. To achieve this, he took a holistic approach, what he called the “complete look.”
For Dior, fashion began with the smallest details and built outwards. Perfume, handbags, shoes and jewellery were not so much scripted features attached to a single production but part of a permutable system. Predominant in this exhibition organized by the Royal Ontario Museum are gowns and daytime apparel from the fi rst 10 years of the House of Dior (1947-57), when the designer was most active. Also on display are supplementary elements that detail Dior’s revival of older dressmaking techniques and their fusion with modern materials, cuts and designs.
In her curatorial statement, Alexandra Palmer notes that 40 of the garments were “donated to [the ROM] by Toronto socialites. They are fragile records of the lives and aspirations of those who made, sold, and wore them. I have interviewed many of these women and men to capture their stories and the transformative power of fashion. It is through the marriage of these resources with archival research, that I trace histories of ingenuity and partnerships from Paris to Toronto. It is this complicated mix of the personal, the aesthetic, and the economic that makes fashion such an endlessly fascinating subject of research...”
glenbow.org