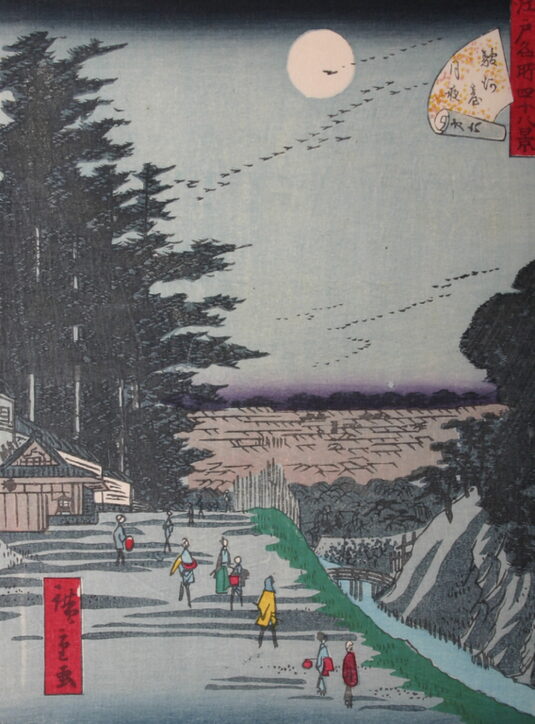 ART GALLERY OF GREATER VICTORIA, Victoria BC - To May 27
by Christine Clark
Ukiyo-e was a Japanese art form popular between the 17th and 19th centuries, comprised of paintings and woodblock prints. The Art Gallery of Greater Victoria (AGGV) houses an Asian collection of over 6,000 prints that includes works by highly influential artists such as Hokusai, whose painting Great Wave off Kanagawa is not only beautiful, but also world-famous.
Research assistant Su Yen Chong and AGGV curator Haema Sivanesan, a recent recipient of two major research grants for her work studying Buddhism and contemporary art, curated this show from the gallery’s remarkable collection of master ukiyo-e artists. On display are works by Hokusai as well as Hiroshige and his protege Hiroshige II. The AGGV is one of the only museums in the world to own a complete set of Hiroshige II’s series Forty-eight Famous Views of Edo (the former name of Tokyo).
The ukiyo-e genre traditionally depicted courtesans and kabuki actors, but the artists in this exhibition reinvented the genre through works celebrating the landscape of Edo and beyond, including the ocean, Mount Fuji and popular tourist destinations. These innovative images also introduced depictions of socially diverse people engaged in normal everyday routines.
Ukiyo-e had a far-reaching impact. Edgar Degas, Claude Monet and Vincent van Gogh (who made copies in oils of Hiroshige prints), among others, were deeply infl uenced by these artists. As Sivanesan explains, “Japanese printmakers had a huge infl uence on artists in the West, up until the mid-20th century. It is important to pay attention to these interactions and exchanges, because it gives us a much richer picture of history.”
aggv.ca