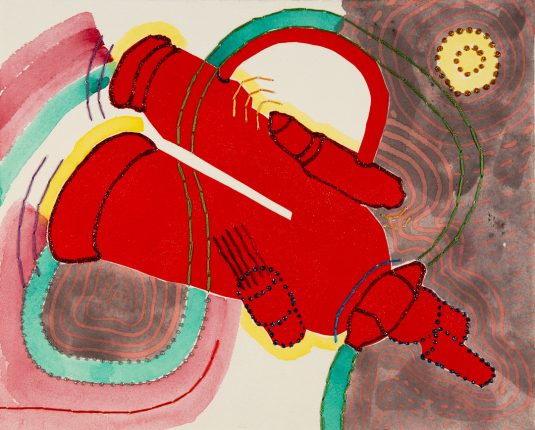 Born in Shizuoka, Japan, in 1950, Taiga Chiba studied at the Atelier Furan Art School in Tokyo and Musashino Art University before immigrating to Canada in 1981. In 1986, he earned an MFA at Montreal’s Concordia University and in 2000 moved to Edmonton, then to Vancouver in 2002, where he is based today. Now in his fifth decade of art making, Chiba is an inveterate world traveller whose practice is rooted in the contingencies that befall high fliers and the itineraries they are beholden to.

His current exhibition takes its name from his 2019 residency in Mandalay, Myanmar, where he stayed at the Dreamland guest house. For Chiba, the day began at 6:30 am, “playing some tennis with the locals,” followed by a shower, breakfast at the Dreamland Cafe and studio work. But the better part of his day was spent in the markets, attentive to the region’s “visual vernacular” – everyday objects, behaviours and processes that he might incorporate into his work.

Subjects explored in Dreamland Cafe include design motifs from Hindu temples, utilitarian objects sold by street vendors, traditional shoe repair shops and a variety of tools used for painting. As for methods, Chiba employs relief printing, painting with fabric dyes and embroidering acrylic fabric liners. How this union of subjects and methods comes together is best left to the artist: “Quite often I get sick in an unfamiliar environment. While being laid low with a fever, many thoughts come and go in my mind; then all of a sudden, some good ideas pop up strangely. When I get better, I try to realize the idea.”