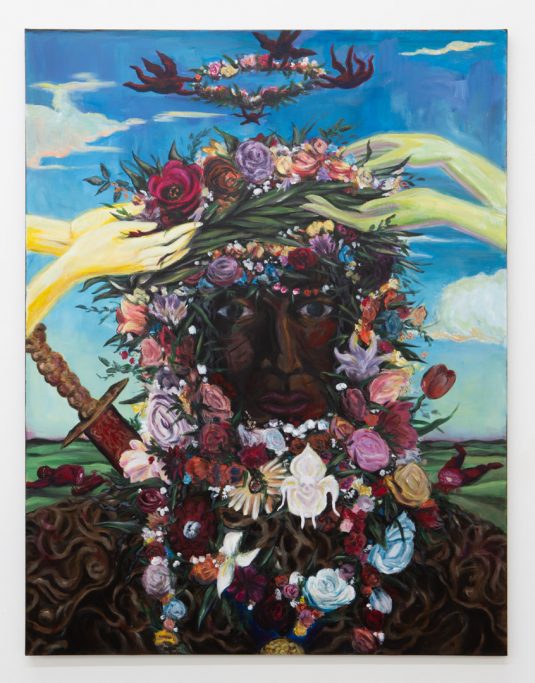 Eden Seifu, With Great Fanfare the Hero Returns from Battle, 2021, acrylic on canvas. Courtesy of the artist and Deli Gallery, New York.

Chief curator Amanda Donnan, working with artist Srijon Chowdhury, has assembled an intriguing contemporary art survey with remarkable ties to the Frye Art Museum’s unusual permanent collection of 19th-century Central European art. With a roster of artists distantly echoing the multinational nature of the museum’s collection, Door to the Atmosphere features artists with backgrounds in Uruguay, Croatia, South Korea and Haiti, for example. The works share, according to the Frye, “a tendency toward spirituality, myth, and the supernatural among artists working today in the United States.”

The seven individual artists and one two-person team are quite varied stylistically but, according to Donnan, explore alternative worlds of either subjective visions or of an external nature, such as the Afrofuturism visually articulated by Harry Gould Harvey IV. Harvey’s installation, A Monument to the Families that Have Nothing to Offer the State but Their Children (2021), repurposes church doors and other industrial and liturgical scrap wood and metal to create a mock-religious setting. His Door to the Atmosphere has a sci-fi feel to it, reminiscent of Octavia Butler’s influential tales of African Americans who flee the planet in search of freedom and liberty.