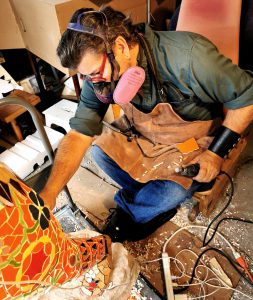 Michel Dumont working in his studio, 2021

Since its establishment in 2015, the biennial Salt Spring National Art Prize has grown into a culturally significant Canadian event, with submissions this year up 40%. Part of this increase could be due to COVID; but to leave it at that would do a disservice to an organization that, in addition to a generous supply of prize money in various categories, has assembled juries comprised of leading arts professionals and also mounted exhibitions that appeal to both the head and the heart. Of the 50-plus finalists for 2021/22, here are two that bear mention.

Michel Dumont is a Two Spirit artist from the Robinson-Superior Treaty Area. His entry, The Mission Indian Day School (2021), began with his deceased mother’s 1955 black-and-white class photo, which he took with him to a 2018 Banff Centre ceramic residency. After baking the image into a handmade porcelain tile, Dumont travelled to Toronto’s Tangled Art + Disability Festival where, in a performance inspired by Rebecca Belmore’s Vigil (2002), he broke the tile with a hammer while calling out the names of his mother and her classmates. Two years later, in recognition of the emotional labour that went into making the piece, Dumont sought to heal the tile using the Japanese method of kintsugi.

Connie Kuhns is a resident of Salt Spring Island. Her entry, Canadian Farmhouse (2021), is a photograph that, to some extent, found her. “The morning I took the photograph, I was driving around on some back roads down by the Fraser River. Fog, farmland. I went the wrong way, and there it was. It reminded me of an Andrew Wyeth painting, and at the same time, so very Canadian. So very humble.”