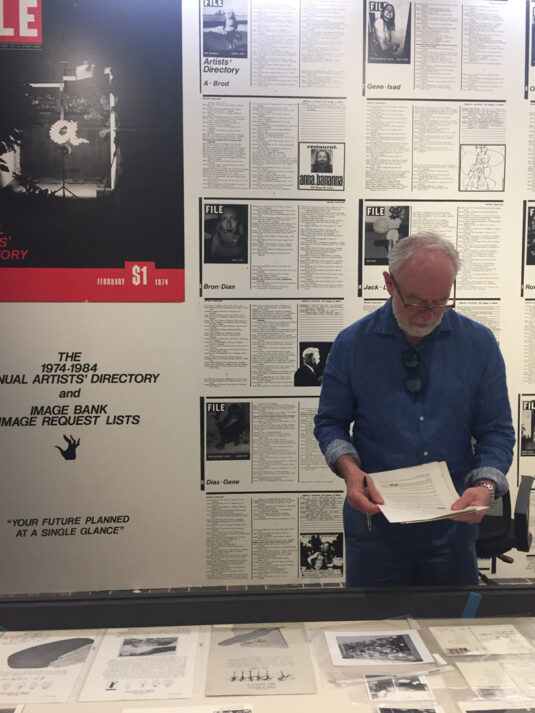 On August 21, UBC’s Morris and Helen Belkin Art Gallery honoured Scott Watson, the gallery’s first director (1989-2021) and former head of the university’s Department of Art History, Visual Art & Theory (2012-18). To say, as some have, that Watson’s retirement marks the end of an era would only be true if he hadn’t already outlived a number of Vancouver’s era-ending moments. In the words of Kitty Scott, National Gallery of Canada deputy director and chief curator, “Scott has been a mentor and teacher to aspiring curators and arts workers who have learned so much from his instinctive resistance to established ways of thinking and doing.”

Trained in art history, Watson emerged as a writer of lyric fiction, publishing Stories (1974) and Platonic Love (1981) before taking a curatorial position at the Vancouver Art Gallery in 1980. His 1985 Young Romantics painting exhibition excited Vancouver’s increasingly diverse alternative scene, connecting the gallery with tail-end baby boomers. At the same time he remained committed to pre-war art practices, most notably the work of Jack Shadbolt (1909- 1998), on whom he produced an acclaimed monograph in 1990.

After a year of writing in Berlin, Watson returned to Vancouver in 1989 and took up the UBC gallery directorship, where he oversaw the construction of a new building that has housed a 30-year run of elegantly designed local and international exhibitions, opening with Lawrence Paul Yuxweluptun (1995). In the late 1990s, Watson was instrumental in the creation of UBC’s renowned Critical and Curatorial Studies Program. In the 2000s, he was a Canadian commissioner for biennales in Venice (2005) and Sydney (2007). His final exhibition at the Belkin, Image Bank, was a collaboration with Berlin’s KW Institute for Contemporary Art.

Throughout it all, Watson maintained a writing practice that, no matter what the subject, melded poetry with critique. An inspiration to many, he is arguably the finest curator Vancouver has ever known.