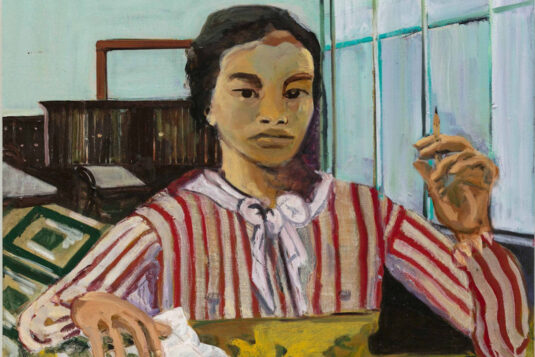 Organized by the PHI Foundation for Contemporary Art, this group exhibition features 27 artists based in Canada, the US and the UK whose ancestry is rooted predominantly in Africa and Asia. Although gallery-goers have no problem recognizing painting as a medium, diaspora, like Art with a capital A, encompasses a range of modalities that account for how people move through the world, but also how the consequences of these modalities have coloured their experiences in “new” lands.

In her exhibition essay, curator Cheryl Sim shares her experiences as a child of Chinese and Philippine parents who immigrated to North America in the 1960s. They eventually settled in Hamilton, Ontario, where she was born and raised within the contradictions of a Canadian multiculturalism policy whose utopian rhetoric, she writes, “would prove to be instrumental in articulating uneven power relations between immigrant ‘others’ and the dominant Anglo-Saxon Canadian culture.” To explore these relations through diasporic perspectives, Sim chose painting, “a medium that in contemporary practices is also continuously freeing itself from strict definitions.”

In addition to presenting experiences that “manifest in a multifarious array of methodological, material and aesthetic approaches,” Sim has emphasized here “diaspora experiences across countries that experienced a major influx of people of colour, as the realities of racialization add a significant dimension to the experience of living in and through difference.”