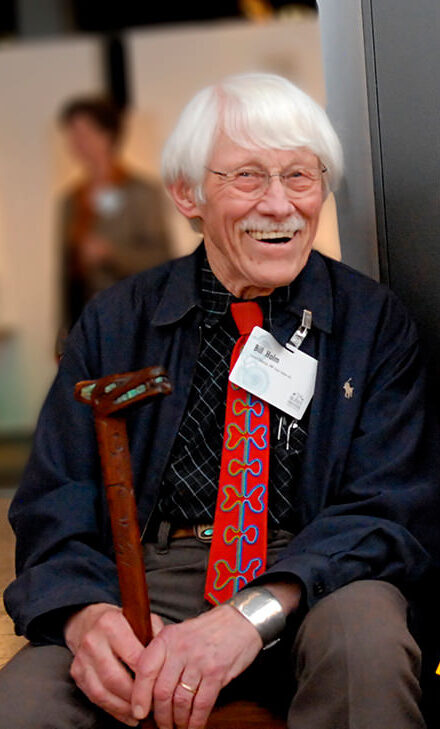 So many artists and elders across the Northwest Coast knew Bill Holm personally. Thousands of others know his work through his foundational publication Northwest Coast Indian Art: An Analysis of Form, which has sold more than 120,000 copies and is a staple on the workbench of many artists on the northern coast. Puyallup artist Shaun Peterson shared that “anyone who is curious about this art generally starts with Bill’s book.” Holm went on to publish eight more books and countless articles on Northwest Coast art. He was a prolific correspondent even into his 90s, always replying to inquiries from artists with as much historical information as he could provide.

Bill Holm was Curator Emeritus of Northwest Coast Art at the Burke Museum and Professor Emeritus of Art History at the University of Washington. His years at the Burke Museum established relationships and ethics of practice that are still in place today. Ninety-five years of boundless curiosity, of limitless sharing of skills and knowledge, of earnest creating of connections across generations, across cultures – this is the cherished legacy we have all received from him.

Tsimshian artist David Robert Boxley, whose formline work was greatly admired by Holm, said: “Most of the days of my life I’ve probably said the word ‘ovoid.’ And that’s because of him. Our words for those shapes are gone… So while we are getting to the point where we are thinking about creating new ones, we owe him a debt. But I think that debt is paid back by doing what we are doing.”

As we know from Holm’s discussions of formline, the negative and the positive always define each other. I like to think that this is true in the legacy of generations – as we lose the giants, their energy and spirit stays with everyone who was touched by their lives. On a personal note, I can say that I would not be the person I am today without Holm’s influence. I know many others can say the same. Bill showed that it is always about respect, relationships, honesty, intellectual curiosity and sharing. As Nuu-chah-nulth artist Joe David said, “I am lucky to have lived in the time of Bill Holm.”

The family has asked that memorial gifts be made to the Bill Holm Center, Burke Museum, Box 353010, Seattle, WA 98195-3010. Donate online at burkemuseum.org/support/give/billholm-center-donation-form.