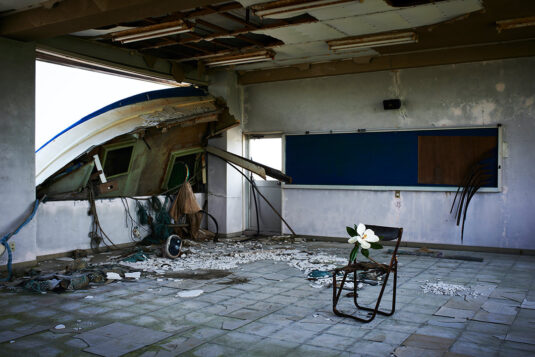 A Future for Memory: Art and Life After the Great East Japan Earthquake

March 11, 2021 marks 10 years since Japan experienced a chain reaction that began with a magnitude 9.0 earthquake, which was followed by a tsunami and then, most horrifically, a level 7 accident at a nuclear power plant in the eastern prefecture of Fukushima. In commemoration of this “triple disaster,” Fuyubi Nakamura, MOA’s Asia curator, assembled the work of eight Japanese artists, groups and institutions to “consider the effect  of natural disasters and reflect on how we are all connected globally.

Among the artists is Masao Okabe, whose Irradiated Tree Series: From Hiroshima to Fukushima (2017) consists of 114 frottage works. These rubbings, produced in areas affected by nuclear disasters, are displayed in a large cylindrical form reminiscent of a silhouetted tree trunk or a nuclear reactor tower. Another artist is Atsunobu Katagiri, an ikebana master who created honorary floral arrangements in Minamisoma City, the closest habitable town to the nuclear power plant. From these he produced 22 photographs, all of which are displayed at MOA.

With respect to the exhibition’s emphasis on global connections, Nakamura has included Tsunami Ladies (2020), a 20-minute documentary that follows the daily routines of six Chilean and Japanese woman who lived through 2010 and 2011 tsunamis, respectively. Told through food procurement and preparation, the fi lm highlights what is particular to women who live within so far disaster-proof patriarchies. At the same time, it emphasizes their common experiences, enriching their families and the larger communities in which they live.