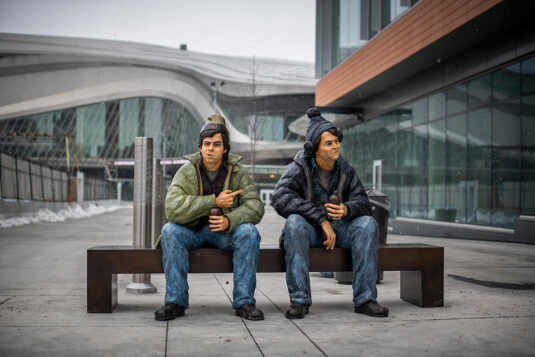 Unlike museum art, where didactics prepare us for what we are about to see, public art can pounce on us while we’re stepping from a cab or crossing a busy downtown street. Startled, we ask what it is we are looking at – yet we know it is public art. For Edmonton artist Ritchie Velthuis, the question of what we are really looking at when we look at public art provides a point of departure for his downtown sculpture of two television characters who need no introduction: Bob and Doug McKenzie.

Although many know Bob and Doug McKenzie from their 1980s Second City Television (SCTV) skits, few know their back story: that actors Dave Thomas and Rick Moranis created them at Dr. Charles Allard’s ITV Studios in Edmonton. Perhaps to honour this quiet past, and because statues of people are not people but their representations (see René Magritte’s Ceci n’est pas une pipe, 1929), and also because SCTV had a particularly circuitous sense of humour, Velthuis provides his sculpture with a back story of its own.

Curated by Darren Kooyman, this exhibition “traces and explains” the journey of SCTV Monument: Bob and Doug McKenzie (2020) from conception to realization. Divided into seven behind-the-scenes segments – “The Genesis,” “Creating the Original,” “At the Foundry,” “The Patina,” “Revisions,” “Installation,” and “Public Relations” – the exhibition succeeds in turning the gallery’s white cube into an actors’ green room fi lled with production documentation, conceptual sketches, project maquettes and correspondence. Appropriately, both Thomas and Moranis have given the project their blessings. As has the Allard family, whose patriarch said he would fund the original SCTV series – as long as it was shot in Edmonton.
harcourthouse.ab.ca