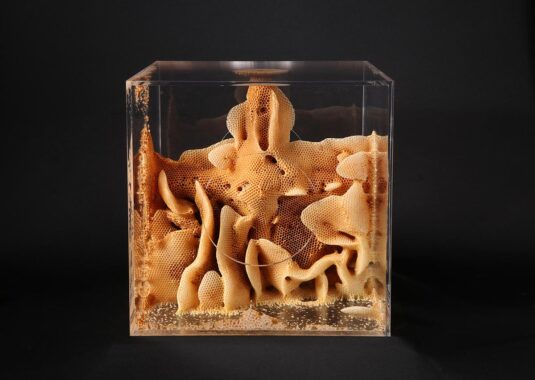 The Imitation Game: Visual Culture in the Age of Artificial Intelligence

The slow but steady passage of visual art into visual culture is as much the result of an emergent 21st-century social practice as it is of technological advancements that have provided us with shared tools with which to communicate our shared experiences. Yet while social practice has inscribed its history in the course of making it, technological history is often taken for granted. VAG senior curator Bruce Grenville (with guest curator Glenn Entis) seems aware of this fact, and the result is The Imitation Game.

Taking its title from mathematician Alan Turing’s idea of “an ‘imitation game’ that could be used to test a machine’s capacity to display intelligent behaviour in a manner that would be indistinguishable from natural human behaviour,” Grenville has designed an exhibition that tracks artificial intelligence (AI) from the 1950s to the present. Like visual art practice itself, which has expanded in that time to include photography, video, performance, installation and social practice, AI’s expansion can be found within the fields of animation, architecture, fashion, urban design and video games, examples of which abound throughout the exhibition.

To describe Imitation Game as sensory overload would be an understatement. But for those seeking respite from screens shrieking scenes from Blade Runner (1982) and The Matrix (1999), there are quieter, if not equally haunting works. One of them is Creepers (2021-22), by graduate students from the Centre for Digital Media. Interested parties stand before a screen and are shown not only their movements throughout the room, but how long they spent looking at the works within it. Also included are works by Stafford Beer, Gui Bonsiepe, Sougwen Chung, Muriel Cooper, DeepDream, Stephanie Dinkins, Epic Games, Amber Frid-Jimenez, Neri Oxman and WETA, among others.