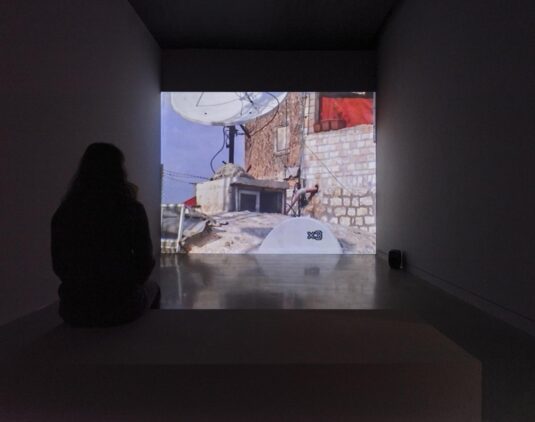 New Media Gallery, New Westminster, BC - Held over to May 8

CCTV systems came into use as department store security devices in the 1970s and ’80s. Since then they have become ubiquitous, claiming to protect both private and public spaces alike. It is the “alike” part that rankles, making all spaces one space: a space of containment. Today, those of us with smartphones and social media platforms like to think we are equally equipped, yet we invariably contribute to similar systems of containment (often our own). It is this double-edged sword of surveillance that is central to Eyewitness.

This exhibition features three video-based installations. Dries Depoorter’s Seattle Crime Cams (2015) is a real-time work featuring multiple screens conveying various civic exteriors. As crimes are reported, viewers are alerted to the location. The potential to see a crime “go down” makes watching this work unstoppable. In Forensic Architecture’s work The Killing of Mark Duggan (2011/2020), the suspicious shooting death of a young Black man by police in Tottenham, UK, is exhaustively researched using a range of sources – including video from a neighbour’s smartphone, civic design layout and legal transcripts – and presented via modelling software.

But of all the works, perhaps the most jaw-dropping is CAMP’s Al Jaar Qabla Al Daar: The Neighbour before the House (2009-11), where residents of an East Jerusalem neighbourhood were given the use of remote-controlled cameras to point at or zoom in on whatever struck their fancy, as well as microphones to record their musings and, in some instances, their conversations. At times these recordings are literal descriptions, such as a recent renovation; other times we are told things we would never read in the papers.