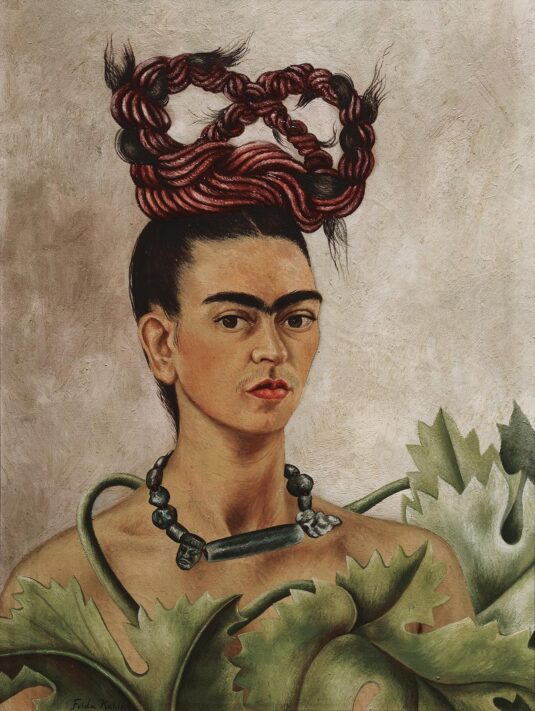 This nationally traveling exhibition highlights the Mexican Modernist art movement, celebrating two artists whose life stories and creative innovations were influential for generations. Frida Kahlo and Diego Rivera were central figures in a vibrant artistic renaissance that began to flourish in the 1920s, following the Mexican Revolution.

The married couple had many peers who were among a bigger picture of artists, activist and writers who considered the social, political and cultural potential of their work to shape national identity. Among their contemporaries were Manuel and Lola Álvarez Bravo, María Izquierdo, Carlos Mérida, David Alfaro Siqueiros, Rufino Tamayo and other well-known creatives whose works are included in this exhibition.

Kahlo’s artistic trajectory began while she was confined to bed after a tragic accident that fractured her pelvis and spine at the age of 18. She painted self-portraits during her recovery and continued to look inward and draw from personal experience throughout her career. The artist’s raw emotional style resulted from intense self-reflection, and often her art would process her pain. Some of her most iconic and revered portraits are part of this show.

Rivera was also famous in his lifetime. He became renowned for his large-scale murals, originally commissioned by the Mexican government to bring ideas to the people on a broader scale. Rivera developed a painting style that rebelled against norms. His simplified figures often depicted socialist themes: the land, people of the working class, as well as heroic and tragic histories infused with his own political ideology. Rivera drew on elements of Indigenous Mexican culture in his work, yet also embraced European styles such as Cubism and Post-Impressionism.

The majority of works in this exhibition are from the collection of Jacques and Natasha Gelman, art patrons who were part of Mexico City’s dynamic art scene. Jacques was well-known for producing films during the 1930s to 1950s, in the Golden Age of Mexican cinema. The couple commissioned and purchased works by many important artists who were also their friends, including Kahlo and Rivera. The extensive exhibition includes over 150 pieces. Alongside paintings and works on paper are a number of photographs as well as examples of period clothing.