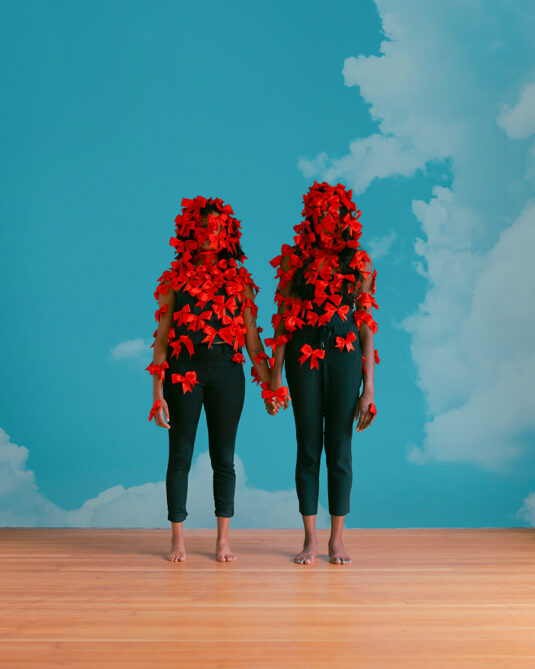 Born in the Democratic Republic of Congo and raised in Brussels, 34-year-old Kriss Munsya is a graphic designer, photographer and award-winning filmmaker now living in Vancouver. His current series of pictures, The Eraser, continues his exploration of the entangled terrain of race, gender and identity, much of it motivated by a childhood rife with discrimination and trauma.

For The Eraser, Munsya presents portraits of Black bodies staged in specially designed interiors. In Eraser Day One (2020), a woman sitting atop a midcentury media credenza leans back, to the point where all we can see of her face is her chin. To her right, large leaves take root in a water-filled glass vase; to her left is a 19th-century-style amber glass lamp. The periods to which these objects correspond are consistent with the cruelties of the Belgian colonial and neocolonial eras, while the regenerating leaves suggest ongoing Congolese resistance, as evidenced by Eraser Modern Still Life (2020), where the vase is placed between the legs of the now upright and skirtless subject.

Easier Black Mirror (2020) is an Afrofuturistic mise en scène. Two figures stand before a vermilion background. The fi rst is dressed in black trousers and an open white sports coat. The figure is shirtless, the chest masculine. Directly behind the first figure, hidden but for a pair of hands, another pair of white-coated shoulders and an outsized afro, is the second figure, a woman. Of the two fi gures, neither face is shown. The second figure’s face is obscured by the first, the first behind a mask comprised of a hundred tiny mirrors.