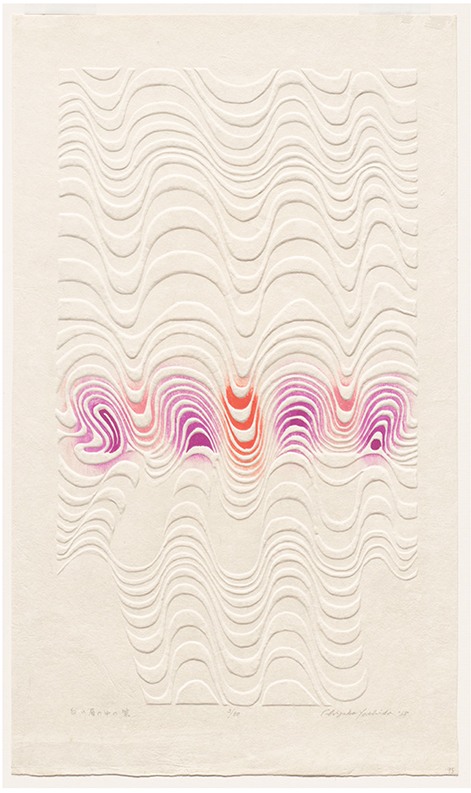 Focusing on Japan’s first women’s printmaking association, this exhibition brings together a collection of rare prints by an innovative and pioneering group of female artists who collaborated within a traditionally male-dominated field, gaining recognition and the momentum to pursue solo careers. This dynamic group of nine professional artists with diverse bodies of work exemplifies a postwar modern Japanese aesthetic that paid attention to worldwide art movements.

The Joryū Hanga Kyōkai (Women’s Print Association) mounted its first exhibition in October 1956 at a gallery in Tokyo. The group continued exhibiting together until their 1965 New York exhibition of etchings, relief prints and lithographs, which met with high acclaim.

Founding members Yoshida Chizuko (1924-2017) and Iwami Reika (1927-2020) are the best-known artists represented in this elegant collection. Yoshida explored ideas among many art movements, such as Surrealism, Abstract Expressionism, Naturalism and Minimalism. She is well noted for her innovation as a print artist working in Japan during the second half of the 20th century. She also embraced techniques like deep embossing – as seen in Shiroi so no naka no murasaki (Violet in a White Layer), where languid lines and repetitious patterns created by dimensionality and subtle color recall an Op Art aesthetic.

Iwami developed a distinctive vocabulary representing the natural world throughout her lengthy career. Her woodblock prints avoid any heavy use of color; instead, wood grain textures convey water patterns through a monochromatic palette, highlighted with accents of gold and silver foil. She also favored embossing in her austere yet powerful compositions. The members of Joryu Hanga Kyokai represent a niche in contemporary printmaking that honors the integrity of traditional Japanese artistry and technique while honing distinct contemporary styles.