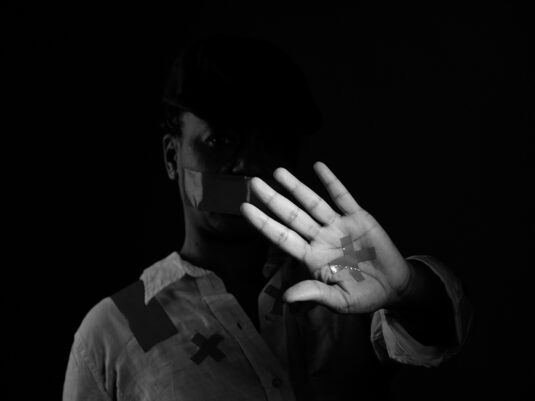 Anastacia-Reneé, an interdisciplinary, multimedia artist, has been widely published and has participated in national art residencies. At the Frye, she is creating walk-through spaces that represent the about-to-be-gentrified house of Alice Metropolis, the artist’s alter ego. According to associate curator David Strand, Alice “strives for wholeness and transcendence against … forms of systemic oppression that … fracture her sense of self.” The immersive installation draws attention to Alice’s writings, collections, clothing and other personal detritus connected to long-term domestic settings. One inspiration is the late Black lesbian author and activist Audre Lorde (1934-1992), who dedicated her life to fighting injustice.

As the rooms reveal themselves, visitors overhear uncomfortably intimate confessions, tirades, and witty repartee reflecting on Alice’s predicament: how to survive as an artist, a woman and sexual minority in urban settings wherein older racial communities are alternately cosseted by white cultural elites and shoved out of affordable housing. With housing prices rising 10% per year, and average rents now approaching $3,000 per month, Seattle’s vaunted hospitality for artists of all colors is now seriously in question.

Housing crisis is presented here as personal crisis. “Alice’s home is a place of refuge and nightmares.” Her “spiritual sanctuary” can only temporarily stave o reality, as she hovers in an environment of poetic mystery, rage and wry humor.

April 1st, 2022: The preview of the Anastacia-Reneé exhibition that ran in our previous issue requires several clarifications. The Frye Art Museum show is part of a series spotlighting winners of the James W. Ray Awards, which support and advance the creative work of outstanding artists living and working in Washington State. Anastacia-Reneé received the 2018 James W. Ray Distinguished Artist Award. Her exhibition, (Don’t be Absurd) Alice in Parts, features installations related to Alice Metropolis, a fictional character invented by the artist; its content and theme of gentrification are not place specific.