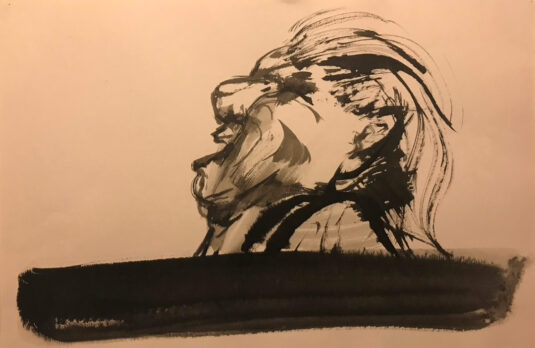 Resident curator Negarra A. Kudumu has created the best Selma Waldman survey yet, with numerous pieces never before exhibited publicly. A sequel to the recent CoCA show A Conversation Through Time & Space, which concentrated on Waldman’s influence on nine contemporary artists, In Focus is the fourth retrospective since her death in 2008, at age 77. Kudumu has selected from the Selma Waldman Legacy Project 20 drawings, prints, collages and pastels dealing with state-sanctioned violence, hunger, human suffering, and other issues spanning 70 years of history.
Whether about South Africa, Iraq, the American Deep South (Waldman was born in Texas) or the Holocaust, Waldman’s encounters with horrific torture and degrading, coercive military violence are expressed in small-scale pastels and charcoals that rope in the viewer who struggles to get a closer look. Blizzards of colored lines obscure figures slowly revealed to display specific examples of power plays between rulers and resisters. As far back as her 1959 Fulbright Fellowship in Berlin, when she first learned the full story of the Holocaust, Waldman dedicated her life to protesting human indignities. As a result, her reputation climbed in Europe, including exhibitions in Berlin, The Hague and the Czech Republic. Over 50 years, Waldman created an “inspiring and revelatory” body of work with a deeply humanitarian ethic.

This show is definitely worth a visit to learn about an artist who rejected Abstract Expressionism, Pop Art, Minimalism and other midcentury proclivities in favor of a dogged realism more akin to Käthe Kollwitz than Helen Frankenthaler. For example, in Blow Your Head O (2000), two naked torsos are involved in the genital torture of a third. Beautiful greens, blues and flesh pinks tease us into closer inspection, only to be repelled and shocked into recognition .

For Kudumu, Waldman’s art-historical signifi cance relates to her prophetic vision. “Hunger is still with us, as in the Bread and Soup series. One half-block from here, you can see the realities of hunger on the street. Selma Waldman saw that much human behavior would remain the same. That is part of her great power as an artist.”