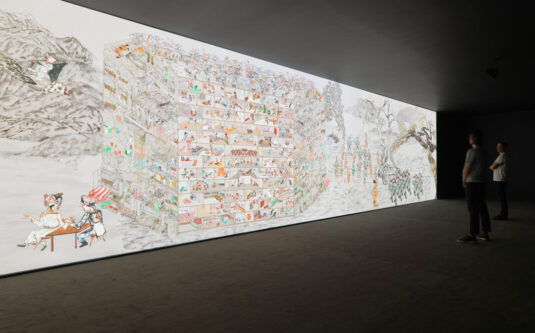 Retainers of Anarchy is a 25-metre-long video installation by Howie Tsui that reveals itself in a scroll-like fashion. The right side of the screen appears to unfurl into the image, like the big-bang theory, unrolling a hand-drawn fantasy version of life in China. The imagery is violent, monstrous, detailed. A room with swollen lovers and incense smoking and then the image of a butcher, the red of blood, and the percussive tap, tap, tap of the cleaver striking bone. A jet plane blocking out the world and moving against the flow, left to right. A mysterious and mostly empty landscape made up of ink drawing on white paper where a lady balances on a line and the soundscape includes the creak of the hangman’s rope. Every character is entirely absorbed in their time and space.

Developed as a critique of the People’s Republic of China, Retainers of Anarchy seeks to undermine official narratives around harmony and order, especially in regard to Hong Kong. The story is set in the time of the Song dynasty (960-1279 CE), which was a great renaissance period, but also within the confines of Kowloon’s Walled City, a place where 50,000 people once lived within 6 acres of land. Retainers of Anarchy draws on the traditional genre of wuxia, a form of Chinese fiction that has been banned numerous times since the 1600s. Wuxia tells stories about lower-class but morally superior martial artists, both men and women, who fight for social justice. Retainers of Anarchy is a complex collection of imagery and soundscape and history, both beautiful and foreboding; this is a political work with bite.