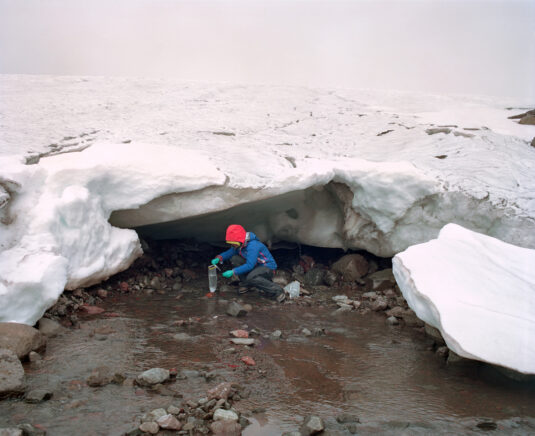 This “collaborative group exhibition” features 11 artists from the Kootenays, across Canada and the US and is based in two rural communities: Nelson and Castlegar. Co-curated by Genevieve Robertson (on behalf of Oxygen) and the KGA’s Maggie Shirley, Overburden refers to both the vegetation and topsoil removed prior to mining and the psychological effect on those for whom environmental degradation is more than a political call to arms.

Nelson and Castlegar are ideal towns in which to stage an exhibition devoted to extractive practices and their varied consequences. Both were “settled” by miners in search of precious metals, and as such these “foundational” narratives have a way of shaping not only civic histories, but also the lives of recent generations.

Although resource extraction is not as immediately present in arctic life as it is in the Kootenays, it has indirect consequences, as evidenced by Sarah Nance’s exo¨geology... (2017). Also known as planetary geology, exogeology is premised on the notion that to understand newly discovered planets, one must have a thorough understanding of the planet Earth. Complicating this understanding is humankind ’s undermining of Earth’s natural cycles through industrial processes. Nance brings this to light in a series of photographs and sculptures (to reinforce a glacier, 2017) that use finely beaded nets not as capturing (extractive) devices but as symbols of rescue and care.