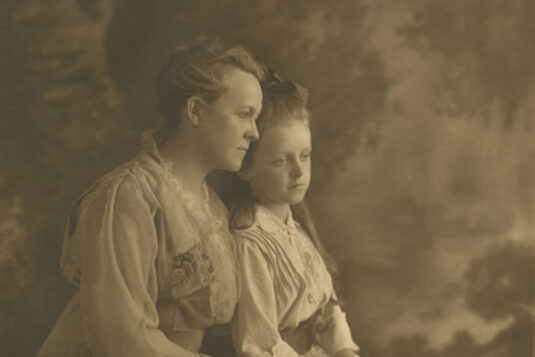 Born into a wealthy New England family in 1906, Catharine Robb was encouraged in the arts at an early age, eventually enrolling in Boston’s School of the Museum of Fine Arts in 1925. There, she met Banff’s Peter Whyte. The two married and returned in 1930 to his hometown, where they lived in a log house that served as a cultural hub for fellow artists and outdoor enthusiasts alike. Peter passed away in 1966, Catharine in 1979. It is Catharine’s lifetime that provides the frame for this biographical exhibition.
The Whyte Museum has drawn from Catharine’s diary entries to her fictitious friend Buz (1921-28), letters to her mother. Edith Morse Robb (1929-62), and “ambitious annual Christmas messages” (1963-78) to allow the artist a posthumous voice in the conversation that is her life and work. From these writings come the exhibition’s thematic chapters: “Childhood,” “Travelling 1924,” “Art School,” “Romance,” “Ban  ,” “Painting,” “Travelling,” “Accomplishments” and “Opening Day.”

Catharine’s primary medium was oils, and this exhibition is rich in her still lifes, portraits and landscapes from the Ban  area, but also from her travels in Bermuda, the West Indies, Hawaii, Bali, Switzerland, Norway, Nunavut, the Northwest Territories and BC’s west coast. Intermingled among her paintings, sketches and sculptures are material objects and artifacts that provide both context and colour to a life that, through the foundation she and her husband so generously formed in 1958, is as much about giving as it is about making.