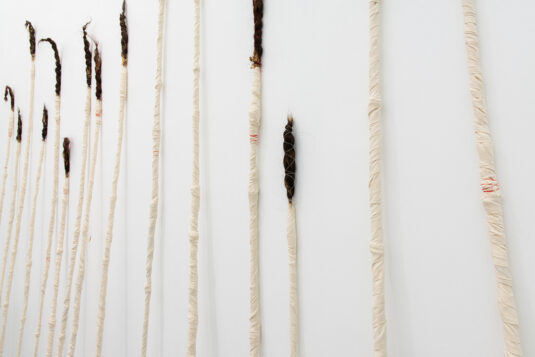 Charlene Vickers is an Anishinaabe artist who has been living in Vancouver since the early 1990s, when she was a student at the Emily Carr College of Art and Design. Over that time, she has developed a practice rooted in drawing, painting, sculpture and performance, with thematic interests in memory, healing and embodiment pertinent to land, language and ancestral lineage. In 2013, she completed an MFA at SFU’s School for the Contemporary Arts; in 2018, she was the recipient of a VIVA Award. Her current exhibition features a selection of work produced over the past 12 years.

Inside the CAG’s Binning Gallery are six works, the earliest of which is Diviners Grasses (2009-10), a series of drawings the artist began while working at her day job. Vickers started each day by applying marker to paper, materially recalling “persistent forms” like fire, grasses, hair and bulrushes. Behind the free-standing wall that supports these drawings leans another work entitled Diviners Grasses (2010). Composed of grass, bamboo, cotton, human hair, jute and thread, these pole-like sculptures commemorate the lives of missing and murdered Indigenous women. 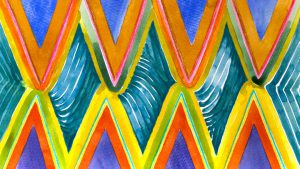 Visible through the windows of the CAG Façade is the work Accumulation of Moments Spent Underwater with the Sun and Moon (2015-16), a mural-sized digital reproduction (from watercolour, gouache and coloured pencil on paper) that features the artist’s signature zigzag motif. Rendered in bright colours, the work references both the quillwork embroidery of Vickers’ ancestors and the urban and natural landscapes through which she moves. An off-site work at the Yaletown-Roundhouse Station, Felt Ovoids (2019-21), digitally reproduces a number of the artist’s smaller fibre works to act as sentinel figures that bear witness to TransLink commuters.