GRIFFIN ART PROJECTS, North Vancouver BC – To May 1 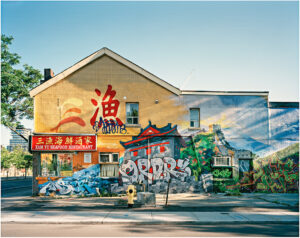 North American Chinatowns serve multiple histories, including a record of immigration, settlement and survival dating back to California’s 1850s gold rush. They also serve as a living monument to those who endure racism despite city governments in Portland, Seattle, Victoria and Vancouver extolling “their” Chinatowns as integral to the urban grain. For guest curator Karen Tam, it is this their that excites the question of whose. 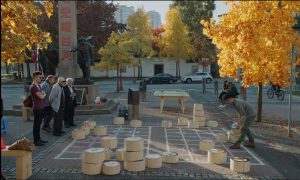 Featuring 29 artists and organizations, and a range of art and artifacts that includes paintings, drawings, photographs, video, sculpture and architectural blueprints, Whose Chinatown? is less a wreath at the feet of these monuments than an overview of Canadian Chinatowns and their various representations – from both within and without. Yet for Tam, history is only the half of it.

“In thinking about the stories, histories and spaces of Chinatowns and their importance to their communities as centres, what are the ways that artists, art collectives and community groups are changing public discourse, planning and perceptions around Chinatowns?” Tam asks. In response, Whose Chinatown? o ers an extensive selection of online public programs, from letterpress workshops with contributing artist Marlene Yuen to a screening of Karen Cho’s NFB documentary In the Shadow of Gold Mountain (2004), followed by a director’s talk and Q&A.

For info on public programs, visit the gallery website or phone 604-985-0136
griffinartprojects.ca