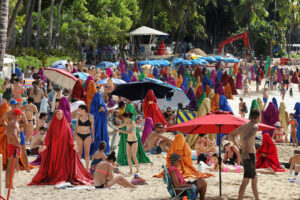 Following in the 1970s footsteps of American artist in Europe Diana Carulli, whose “traveler scarf” was photographed all over the world and acted as a surrogate for the New York artist, so Anida Yoeu Ali’s Red Chador motif, a sequined garment, has been seen in cities across the globe. In 2015, in Paris, Ali staged a 12-hour performance in the Palais de Tokyo, partly in response to the Charlie Hebdo killings. After the late-2017 disappearance and “kidnapping” of the chador in Tel Aviv, Genesis I marks its reappearance at Western Washington University’s Western Gallery.

A Muslim Khmer woman born in Cambodia, Ali now lives in Tacoma. She is artist-in-residence at the University of Washington, Bothell, where she teaches courses in interdisciplinary arts, performance and global studies. Earlier iterations of The Red Chador concentrated on publicly accessible sites where complete strangers could witness the artist in performance. Ali’s WWU installation/exhibition might involve interacting with the university’s incomparable collection of monumental postwar American abstract sculpture, which includes Richard Serra’s fi rst public commission as well as the latest contribution by Sarah Sze.

Genesis I continues Ali’s “thematic interest in using religious aesthetics to provoke ideas of otherness.” Western Gallery director Hafthor Yngvason writes: “I have followed Anida’s installation and performance work for some time now and always been impressed with its strong visual impact. The way she explores transnational identity and confronts the misrepresentation of Muslim women is unique, and it is particularly timely now to bring these issues to the university community and beyond as instigation for thoughtful discussion.”