Following the recent death of Virginia Bloedel Wright, legendary modern art patron, the Seattle Art Museum has organized a show about her. City of Tomorrow: Jinny Wright and the Art that Shaped a New Seattle is slated to open October 15. But right now, Wright’s pioneering commissions of younger postwar American artists are on view at SAM’s downtown hillside sculpture park overlooking the Olympic Mountains. Zigzagging pathways lead visitors past masterpieces that reveal Wright’s foresight with hitherto unknown but promising sculptors.

For example, here is not just any Mark di Suvero, but his first commission anywhere, Bunyon’s Chess (1965), which he originally designed as a cantilevered playground for the Wright children. Similarly, Richard Serra’s fi rst public artwork is on the Western Washington University campus in Bellingham, one of several works funded by her and her late husband, Bagley. Commenting on the couple’s signifi cance to him at the opening of OSP in 2007 Serra insisted, “Jinny and Bagley … they invented me!” 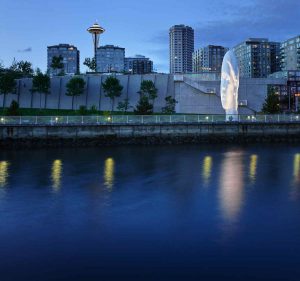 Perched on the shoreline is the most recent work, Echo (2011), by Catalan artist Jaume Plensa, a haunting face forever guarding Elliott Bay. Nearby, eye-shaped benches by Louise Bourgeois circle her fountain, Father and Son (2005), with its unique timing system that splashes water on one fi gure while submerging the other, continuously reversing the rising and falling water flows.

While other SAM locations (and the PACCAR Pavilion) may be closed, OSP is open to the public daily. Visitors are requested to wear face masks, observe social distancing, avoid groups or gatherings, and keep moving along the pathways. This way, other works by such luminaries as Beverly Pepper, George Rickey, Mark Dion, Ellsworth Kelly and Roxy Paine may be comfortably viewed.

Open daily, 30min before sunrise till 30min after sunset