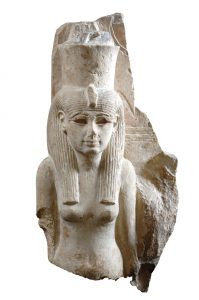 Nefertari (1290-1224 BCE), not to be confused with Queen Nefertiti, was one of several wives of the pharaoh Ramesses II. She wasn’t just any poly wife though; she was the favored wife and her royal tagline was “The One for Whom the Sun Shines. Beautiful Companion. First Royal Spouse.”

Her tomb and its contents provide a familiar look inside the afterlife of the Egyptian ruling class, with the statues of deities and preserved household items that are customary in Egyptian royal tombs. The 230-piece collection is drawn from the Museo Egizio in Turin, Italy, and is one of the best collections outside Egypt.

Queen Nefertari’s Egypt celebrates the role of women, from goddesses to queens to commoners. Queen Nefertari appears in many sculptures and images and is identified in inscriptions on buildings associated with Ramesses II. A temple was consecrated to her in Abu Simbel, beside the one dedicated to her husband. Her tomb is the largest and most richly decorated in the Valley of the Queens. It was discovered in 1904 by archaeologists led by Ernesto Schiaparelli, then director of the Museo Egizio.

Look out for smooth stone statues of the goddess Sekhmet (wearing a lioness mask) and a granite statue of Ramesses II seated between the human-size gods Amon and Mut. Stunning pieces include the statue of Keret, overseer of the harem, whose folded legs are enclosed in fabric, forming a large block.

Also on show are Schiaparelli discoveries made in the nearby village of Deir el-Medinaw, showing what daily life would have been like for the artisans who constructed Nefertari’s tomb.