Thinking outside the canoe led the late Bill Reid (1920-1998) to create monumental iconic works such as The Raven and the First Men (MOA), Chief of the Undersea World (Vancouver Aquarium), and The Spirit of Haida Gwaii (Vancouver International Airport). He drew upon his understanding of traditional Haida art forms and rendered them in contemporary ways. Reid is recognized as one of Canada’s greatest creative geniuses.

Gwaai Edenshaw, considered to be Reid’s last apprentice, is guest curator for the exhibition entitled To Speak with a Golden Voice, presented in celebration of Reid’s 100th birthday. Edenshaw wrote: “Bill Reid was a master goldsmith, sculptor, community activist, and mentor whose lasting legacy and influence has been cemented by his fusion of Haida traditions with his own modernist aesthetic. Just about every Northwest Coast artist working today has a connection or link to Reid.

Before he became renowned for his artwork, he was a CBC radio announcer recognized for his memorable voice – in fact, one of Reid’s many Haida names was Kihlguulins, or ‘golden voice.’ 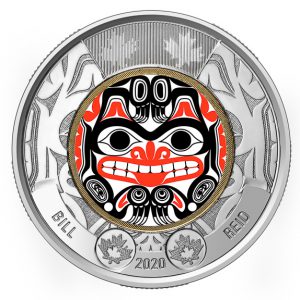 His role as a public figure helped him become a pivotal force in the resurgence of Northwest Coast art, introducing the world to its importance and empowering generations of artists.”

On the 100th anniversary of Reid’s birth, the Royal Canadian Mint issued a new $2 coin featuring a striking colour image of Reid’s Xhuwaji/Haida Grizzly Bear design, which can be seen at the gallery. Said Marie Lemay, president and CEO, “The Mint is delighted to add the story of Bill Reid’s pivotal role in raising awareness of Haida art, and the traditions and culture it represents to the long list of circulation coins celebrating what makes us proud to be Canadian. Millions of Canadians will experience the power and beauty of Bill Reid’s art as this coin finds its way to them in their change.”

Haawa (“thank you” in Haida) to master artist Bill Reid for his exceptional contributions to Canadian art.