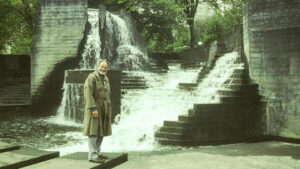 Considered one of the greatest landscape architects of the 20th century, Lawrence Halprin had a distinguished career that spanned 60 years. The renowned designer began his work in the San Francisco Bay area in 1949. He first gained national attention at the 1962 Seattle World’s Fair, for his Ghirardelli Square adaptive- reuse project in San Francisco’s Marina District.

Halprin’s ideas influenced a generation to reimagine urban space. He used a creative methodology that valued process and response; he also brought a narrative element to landscape architecture by more fully considering human scale and the interaction with place.

Many of his designs reflect natural elements like waterfalls and valleys that are prevalent throughout the Pacific Northwest. Halprin brought these primal places to urban areas with a modernist grace that fed off ongoing collaborative efforts with his choreographer wife, Anna Halprin, and their creative visions together.

This exhibition takes a closer look at Halprin’s Open Space Sequence, a transformative design in landscape architecture that encompasses an eight-block area of downtown Portland. Its iconic fountains, greenspaces, pedestrian walkways and parks form one of the largest, most sophisticated expressions of Halprin’s concepts for public plazas. Keller Fountain and Lovejoy Fountain are the most memorable fountain plazas that are part of the Open Space Sequence.

Constructed from 1966 to 1970, the original project was part of the city’s first urban revitalization initiative. It was located in a South Portland neighborhood previously home to the majority of the city’s Jewish and Roma immigrant communities. The Open Space Sequence was added to the National Register of Historic Places in 2013, one of the fi rst modern design inclusions. The OJMCHE is offering weekly walking tours in partnership with the Architectural Heritage Center.