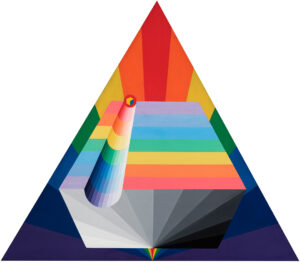 Gary Lee-Nova is one of a dozen Vancouver artists who emerged in the 1960s who were instrumental in expanding the city’s visual art scene from painting and sculpture to intermedial practices rooted in collaboration, performance, fi lm, correspondence art, installation and electronic media. Like local pioneers Roy Kiyooka, Michael Morris and Audrey Capel Doray, Lee-Nova came to attention as a painter before exploring fi lm and installation. Between 1983 and 2008, he devised and taught courses at what is now the Emily Carr University of Art + Design.

Though never prolific, Lee-Nova is known for his attention to detail and for taking years to bring certain projects to light, a number of which will be on display in this overdue retrospective. One such work, made in collaboration with Alan Miller, is Out to Metric (1975), an 8- by-7-foot partial office room (with a door that reads THUMB RULE CO. LTD.) constructed with over 1,400 wooden yardsticks suddenly redundant after Canada began its conversion to the metric system in 1970. Another collaboration is Image Bank, a “living archive” he co-founded with Michael Morris and Vincent Trasov in the late 1960s. 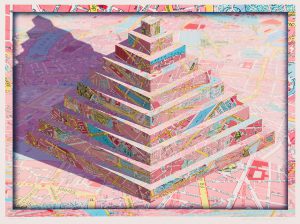 Also on display are some of Lee-Nova’s earliest and best-known works. These include Surrealist/Hard-Edge/Pop conflation paintings like Menthol Filter Kings (1967), a haunting acrylic work evocative of a cigarette pack, with a conical cigarette- like form breaking from it at a right angle, a shaded cube approximating its “lit” end. Another well-known work is Steel Mushrooms (1967), a collagist film that gathers together short shots of urban utility forms (such as those mushroom-shaped air vents) and projects them as if from a semi-automatic rifle.