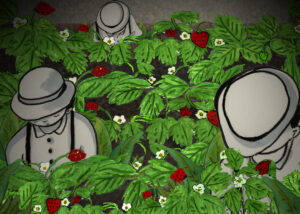 For too long the history of British Columbia was a Euro-Western settler fantasy. Among the previously unacknowledged histories to enter public consciousness are those of the Issei and their Nisei and Sansei descendants, highlighted in these exhibitions at the Surrey Art Gallery.

In Autumn Strawberry, Cindy Mochizuki uses video and sculpture to depict the lives of Japanese Canadians who worked on and owned farms in the Fraser Valley before World War II. Drawing on archival research and interviews with first-generation immigrants (Issei), their children (Nisei) and grandchildren (Sansei), Mochizuki blends real and imagined characters and storylines into a series of vignettes. Women pickling, men picking berries and children polishing eggs are rendered in paint and digital animation and projected onto walls and screens. Smaller projections are sheltered in tree stumps and barn segments throughout the gallery.

Henry Tsang’s Hastings Park multimedia installation of photos and projections begins where Mochizuki’s leaves off, with the Canadian government’s detention of roughly 8,000 Japanese Canadians in 1942, shortly after the bombing of Pearl Harbor. Prior to the opening of inland internment camps, these detainees were held in four Hasting Park buildings, one of which, the Livestock Building, is known today for hosting the PNE’s petting zoo and pig races. Tsang uses thermal photography to reveal leaks and cracks in these buildings invisible to the human eye. In Tsang’s words, “I am asking the buildings to remember.”