Home Black Refractions: Highlights from the Studio Museum in Harlem 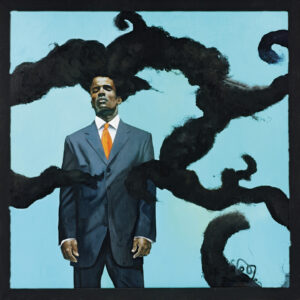 The Frye’s newest exhibition, Black Refractions, is an expansive, multifaceted survey birthed out of Harlem, New York. Assembled by the Studio Museum in Harlem and the American Federation of Arts, the collection features almost 80 artists, with works from the 1920s to the present, highlighting a century of Black artistry.

The Studio Museum in Harlem, founded in 1968, is known for being a birthplace for revolutionary Black art. Nestled in the Harlem neighborhood, the museum was created to support and teach inspired Black artists. From the beginning, it provided studio space through its artist-in-residence program and showrooms for exhibiting students’ art. The museum worked to create a space where Black art could be shared with the community, a place where people could discuss and interpret the pieces. Founded by an eclectic group of activists, artists and humanitarians, the museum also challenged the racism and obstacles Black artists had to face to display their work.

Featuring the work of Jacob Lawrence, Lorna Simpson, Nari Ward and many more, the show presents a wide array of styles and approaches to depicting the Black experience. In media ranging from oil on canvas to sculpture and collage, each piece conveys a personalized view of Blackness. Quoting the Frye: “Reflecting the Studio Museum’s position as a site for the dynamic exchange of ideas about art and society, this exhibition reveals the institution’s commitment to fostering artistic dialogue and innovation.”

This dialogue plays out in five sections, whose titles include “Abstraction,” “Framing Blackness” and “Their Own Harlems.” Within these thematic groupings, we experience the changing views and interpretations of the artists. Their works showcase how Harlem and New York City impacted their view and how their own Blackness shaped their understanding of the world.